“In a land mark agreement signed at State House today, Governor Mike Mbuvi Sonko and Devolution Cabinet Secretary Eugene Wamalwa in concurrence with H.E President Uhuru Kenyatta, signed an agreement, handing over functions of the Nairobi County Government to the National Government, pursuant to Article 187 of the Constitution. 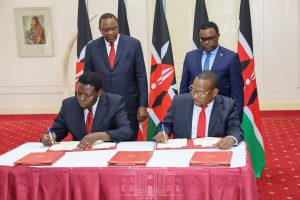 “The signing of the agreement was also witnessed by the Speaker of the Senate, Hon. Kenneth Lusaka and the Attorney General Paul Kihara.

“The National Government therefore, will take over the following functions of the Nairobi County Government:

“The move comes as a breakthrough in the running of county services that had ground to a halt.”

According to Article 187 of the Constitution, a function or power of government at one level may be transferred to a government at the other level by agreement between the governments if;

(a) the function or power would be more effectively performed or exercised by the receiving government; and

(b) the transfer of the function or power is not prohibited by the legislation under which it is to be performed or exercised.

(a) arrangements shall be put in place to ensure that the resources necessary for the performance of the function or exercise of the power are transferred; and

(b) constitutional responsibility for the performance of the function or exercise of the power shall remain with the government to which it is assigned by the Fourth Schedule.

This comes as a breakthrough in the running of county services that had ground to a halt.

Speaker Beatrice Elachi on Tuesday gave Sonko until Monday at 10.00 am to submit written replies to the allegations raised in the notice of motion on impeachment.

The County Assembly Speaker directed the clerk to serve Sonko with the notice of motion.

At the same time, members of the public have been requested to submit written memoranda regarding the matter.

On February 22, Makongeni MCA Peter Imwatok tabled a notice to impeach Sonko, accusing him of among other accounts, violating the constitution and abuse of office.

Impeachment talk has been rife since Sonko was arrested in December and charged with irregular procurement and payment of over Sh357 million.

He was also barred from accessing his City Hall office.