The Orange Democratic Party (ODM) is rocked with confusion after its Nairobi Chairman MP George Aladwa authored a controversial letter ostensibly with the blessings of party leader Raila Odinga. 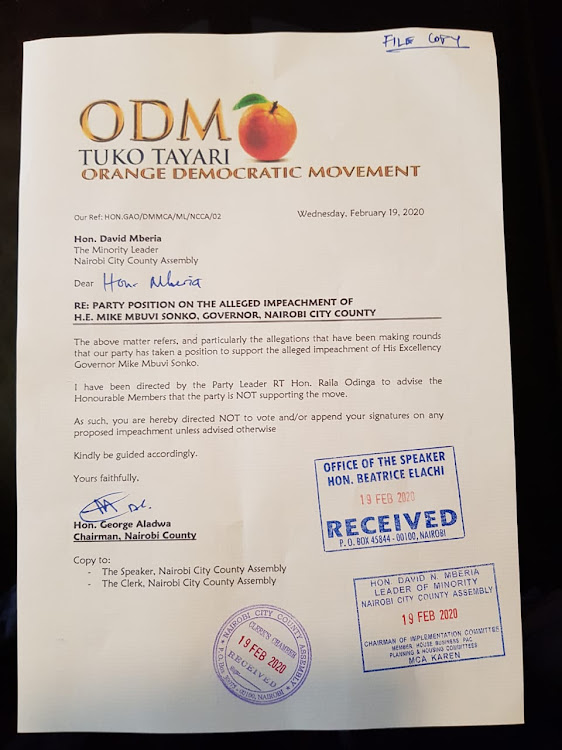 However, Secretary-General Edwin Sifuna dismissed the letter and its contents, stating that the Party leader had no powers to influence the MCAs in their people-given mandate to oversight the executive.

Sifuna added that Aladwa’s position was not entirely that held by the ODM Party and that the MCAs had the freedom to conduct their business independently.

City Hall was given the green light to proceed with an impeachment motion against Sonko who is currently facing a Ksh357 million corruption charge.

Secretary General @edwinsifuna has clarified that the letter allegedly authored by the Party’s Nairobi County Chairman Hon. @aladwa_george is not the official party position with regard to the matter before the County Assembly of Nairobi on Governor Mike Mbuvi Sonko. pic.twitter.com/CzEYXOZLrw

Embakasi MCA Michael Ogada had been delegated the task to collect at least 40 signatures from his colleagues so as to kick off the impeachment process.

Minority whip and Makongeni MCA Peter Imwatok revealed that the ODM Party had taken a position in Sonko’s impeachment should it begin.

The County plunged into a leadership crisis after Sonko was barred from accessing his official offices at City Hall over a corruption charge.

The Governor lacks a Deputy after falling out with his running-mate Polycarp Igathe in 2018.