This has seen motorists lose valuables and in extreme situations, their vehicles, often, in crazy ways.

Opera News went through a number of reported carjacking cases and police records within the city, which exposed the ingenious methods that robbers are now using to steal from motorists.

One Gabriel Kimani was driving his car within the city centre when a man in a wheelchair knocked on his window pane.

Thinking that he was a beggar, Kimani dug into his pockets to hand him some money but to his surprise, the ‘beggar’ snatched his mobile phone and started wheeling away.

When he tried to open his car door, another man, who pretended to be hurriedly walking, blocked the door, giving the man in the wheelchair a chance to flee.

“It was so fast that by the time I was free to go after the man, he had already disappeared and the traffic was moving, and other drivers were hooting behind me. I had no option but drive away,” he said.

Under this trick, a driver suddenly stops his car with the aim of getting hit from behind by an innocent motorist.

If this works, the cunning driver will angrily jump out of his car and start causing drama.

Naturally, a motorist who falls for the trick agrees to inspect the hit vehicle and it is at this juncture, when he/she is distracted, that someone else jumps into his/her car, and steals valuables.

“They usually target drivers who are the only people in a car and strike,” said Amos Chirchir, a detective based in the city.

This is a trick that has seen kind drivers end up paying for their soft-heartedness.

In a rare incident, Peter Nyabuto was driving home when he encountered two ladies who asked for a lift.

“I decided to help them since a number of people were stopping vehicles along the road, and they all sat on the back seat,” Nyabuto said, adding that this happened along the Denderu- Limuru road.

Nyabuto said that by the time the women alighted his laptop was missing.

“They left the bag on the back seat but they made away with the laptop… all through the journey they introduced themselves as farmworkers,” he added.

Another trick under the pedestrian-in-distress theft method is a ‘pregnant’ woman pretending to be feeling unwell, and asking for assistance.

Some robbers also pretend to be hawkers selling various items along major highways especially when there is heavy traffic.

Drivers who fall for this trick end up purchasing items such as water and fruits that are laced with drugs.

The notorious hawkers, who usually have cars that they use to fulfil their mission on standby, will then follow their targets until they are completely overwhelmed by the drugs.

Infotrack, in a report released two years ago, revealed that the method was very common and in most cases, drivers easily forgot what had happened to them.

This is also a common method within the city centre and on major roads leading to the city.

The most common areas where this happens include; Ngara, Koja, River Road and Mombasa Road, where muggers take advantage of traffic to steal from motorists.

Officers from Kamukunji police station told Opera News that most of the stolen phones that have been recovered this year, from stalls within the city, were obtained through such methods.

Nairobi police boss Philip Ndolo said that the method is common and police were keen on ending the menace.

“The problem has been in existence but the police have also cracked this gang, and they should be warned that their days are numbered,” he said. 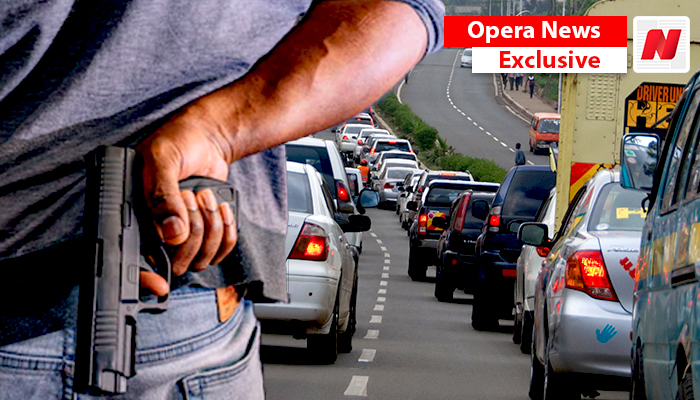 If you are driving within the city centre, you are likely to encounter someone directing traffic, but they are not traffic officers. You should be very keen when approaching such individuals since most of them are robbers.

In most cases, they target lone drivers and operate at night.

They are the kind of robbers who take their time robbing motorists without care.

Women and young ladies have been victims of such individuals, and are often targeted because most are defenceless.

So daring are they that they dress in county askari uniforms, stop motorists, and even make arrests.

Robbers also erect barriers on the roads and when motorists slow down while approaching them, they are attacked.

The Southern Bypass is notoriously known for that.

The thieves also use nails and other sharp objects to deflate tires and then strike after pretending to assist stranded drivers.

Such robbers also take advantage of roads that have potholes.