Deputy President William Ruto on Friday suffered a huge blow if pronouncement made by President Uhuru Kenyatta is anything to go by.

Speaking during issuing of title deeds in Nyandarua, the president said that he would not endorse or support any candidate who would vie in the 2022 elections.

“Anyone vying in the 2022 elections will fight for their space and should not expect me to support him,” he said in a statement ostensibly directed to his deputy. 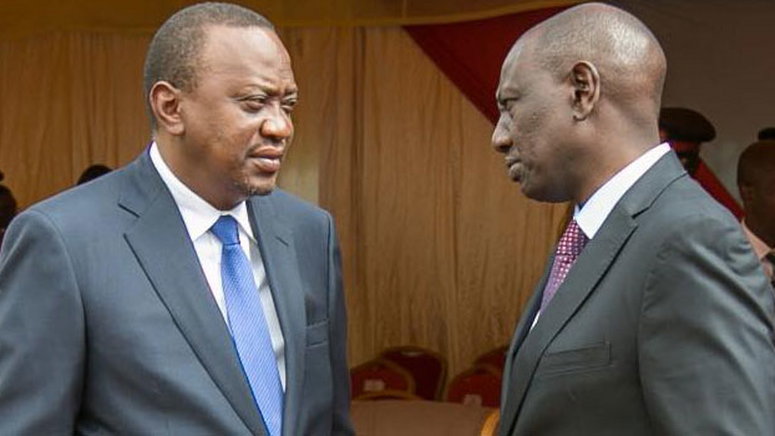 The president further castigated his deputy for doing a shoddy job after he sent him directly.

” I will not be sending people anymore,” he said amidst cheers from the crowd that had gathered.

He was furious and surprised that after he had sent his deputy to ensure that the houses in Nyandarua got electricity, a large number of houses were still not connected to the grid.

He also affirmed that the BBI wave would not be stopped anytime soon.

This will also blow on Senate Majority Leader Kipchumba Murkomen especially after he vowed that Deputy President William Ruto and his allies will not decamp from the Jubilee Party.

He had earlier said that as Jubilee members, they had invested greatly on the President and the party and that nobody would lecture them on leaving the party.

“For those who think they will reap where they didn’t sow, we are not about to separate ourselves with Uhuru Kenyatta and Jubilee, that is our investment,” he said.

Mr Kenyatta on Monday laughed off moves by some Jubilee lawmakers attempting to scuttle his unity efforts through the handshake and the Building Bridges Initiative.

In a directed message to members of Jubilee’s Tangatanga faction who on Monday resolved to chart their own political path by, among others, organising their own political rallies as part of the ongoing BBI forums, the President said his unity quest is unstoppable and no amount of politicking will derail the initiative.

“Mimi sina haja na siasa ndugu zangu (I have no interest in politics) … all I want is a united country after 2022,” he said at Kabazi Trading Centre in Nakuru county.

He went on, “I, therefore, urge all the leaders to be careful and shun divisive politics and instead work towards the development of this nation.”