A section of leaders allied to Jubilee Party’s kieleweke faction has moved to court to demand the swearing-in of Kiambu Deputy Governor James Nyoro as the new county boss.

This is after the swearing in of the new Kiambu Governor was postponed by Judiciary due to unavoidable reasons.

A new date is set to be communicated later.

However, Kiambu Women Representative Gathoni Wamuchomba, nominated Senator Isaac Mwaura and some other leaders walked to Kiambu Law Courts over the delayed arrival of the judge who was to swear in Nyoro.

The event was to be presided over by High Court Judge John Onyiego in Kiambu, barely hours after embattled Ferdinand Waititu alias Babayao was removed from office by impeachment.

The judge failed to show up with the leaders who have moved to court now alleging that he might have been paid not to avail himself.

The kieleweke leaders argued that corruption was fighting back, demanding to see the judge who was to oversee the ceremony.

Some argued that there was someone giving instructions to the judges.

Babayao was impeached on grounds of gross misuse of resources, violation of office among others.

Senate Speaker Kenneth Lusaka on Wednesday night gazetted the impeachment and removal from office of  Babayao, shortly after the House passed a motion to that effect.

According to the gazette notice, Waititu was found guilty of gross violation of the Constitution of Kenya, the County Government Act, the Public Finance Management Act and the Public Procurement and Disposal Act, Crimes under the National law and, Abuse of Office/Gross Misconduct. 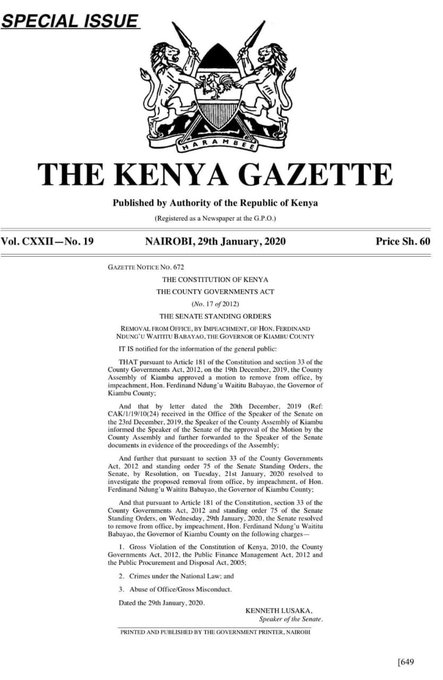 Netizens on Thursday morning claimed that invitation cards to Nyoro’s swearing-in ceremony were sent out on Wednesday night just after the Senate had taken the vote to impeach Mr Waititu.

In the meantime, embattled Waititu has moved to Court to fight the impeachment.

Waititu on Thursday morning moved to Milimani law courts to challenge his removal from office. He also sought orders to bar Nyoro from being sworn in.