Real Madrid went top of the Spanish La Liga table following a hard-fought 2-1 victory over Sevilla at the Santiago Bernabeu. Brazil forward Casemiro opened the scoring in the first half after a tense first half.

Luuk De Jong leveled matters for Sevilla but Casemiro would again put Real Madrid ahead with a long-range shot just four minutes later. The result leaves Real Madrid three points clear Barcelona at the top of the table but the Catalans have not played this weekend, they host Granada at the Camp Nou next week.

Los Blancos haven’t lost in 17 matches since they were defeated by Real Mallorca on October 19.

Since then, Zinedine Zidane’s side have played 11, won seven and drawn four in LaLiga Santander in a run that’s seen them travel to Mestalla and the Camp Nou.

It’s fair to say that Zinedine Zidane’s Real Madrid team selection raised a few eyebrows before their match with Sevilla kicked off. 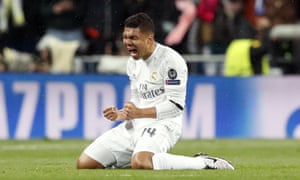 The new-look front three of Rodrygo Goes, Luka Jovic and Lucas Vazquez didn’t click and the team’s performance suffered as a result.

Luckily for Zidane, Casemiro is always on hand to make the difference, scoring twice either side of Luuk de Jong’s equaliser in the second half.