Matatu operators, bodaboda riders, and residents of Kasarani area Wednesday found themselves in a tight corner, as police unleashed all manner of anti-riot weapons upon them, during their heated demonstrations over the poor state of the Kasarani-Mwiki road.

Police had earlier used tear gas on the rowdy protesters, but videos circulated online Wednesday afternoon indicated that the situation had quickly escalated, with police being forced to use tankers, reserved for extremely chaotic situations, to spray the irate citizens away.

Transport along the busy road, which links the larger Kasarani areas of Seasons, Hunters, and Mwiki to the Thika Superhighway, has been paralyzed over the past three days, as residents and stakeholders petition for the government’s intervention on the road, which has for several years remained in a pathetic state.

It is so simple as a leader to communicate to the people who voted for you #Kasarani pic.twitter.com/ICV4Q6v7NB

Area MP Mercy Gakuya has not commented on the matter so far.

Commuters living along the affected route have since Monday been walking tens of kilometres to the Thika Superhighway, inorder to access transport to their workplaces around Nairobi.

This even as heavy rainfall pounds Nairobi, especially during morning and evening rush hours. 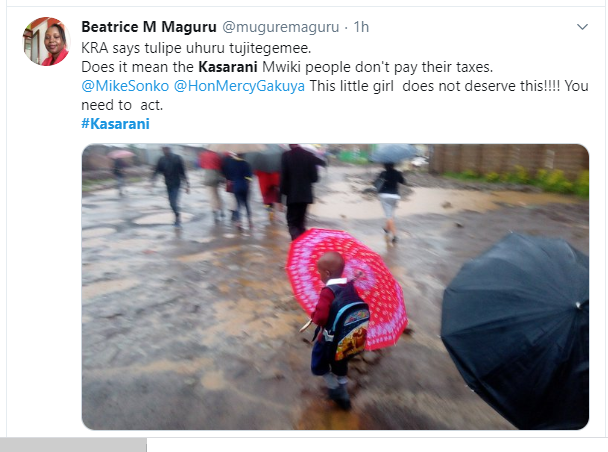 Reports from the constituency indicate that bodaboda rides in the area have hiked fares to as much as Ksh500.

Matatu operators have severally ceased operations in protest of the transport infrastructure in the area, as was the case in December 2019, and April and May 2018.

The only action taken by the area leadership so far has been filling of potholes, but motorists insist that the road need to be fully recarpeted and expanded.