Real Madrid scored all their kicks while Diego Simeone’s men missed two spot-kicks. It is the first trophy under Zinedine Zidane since he was re-appointed as the Los Blancos head coach. However, none of that would have been possible without one piece of cynical play from midfielder Federico Valverde. Deep into the second period of extra time, Atletico Madrid broke on a counter-attack with just five minutes remaining till the final whistle.

Alvaro Morata was clean through on goal but the Uruguayan midfielder fouled him and earned himself a straight red card. More importantly, however, his team did not concede what would surely have been the title-clinching goal and would instead go on to win on penalties. 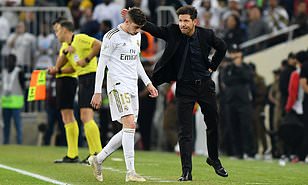 Below is the video..

This is what we call the ‘tactical foul’. Ramos did the same in the UCL final against Atletico Madrid & Real Madrid went on to win the Champions League.
Just 5 mins left on the clock & the red card was definitely worth-taking in that situation. pic.twitter.com/9ncLlMdVus