Nairobi Governor Mike Sonko Monday named one Anne Kananu Mwenda as his nominee to the position of Nairobi Deputy Governor.

Sonko’s move brings to an end a two year wait for the Nairobi electorate after his 2017 running mate Polycarp Igathe resigned from the Deputy governorship shortly after their gubernatorial victory.

Here are several facts about Sonko’s nominee who if approved, will take charge of an embattled county as the governor stays away from office as directed by the court in his corruption and abuse of office case.

She was widowed in 2019 through a road accident

In a heartfelt post on social media, Sonko announced the passing away of Anne’s husband, the late Phillip Njiru Muthathai in January 2019.

According to the governor, the deceased lost his life in a tragic road crash at Devki area in Athi River.

“May the Lord give you strength during this difficult moment. I have on several occasions mingled with Philip and I can say we have lost a very joyful and courageous friend. We shall all miss him,” Sonko wrote. 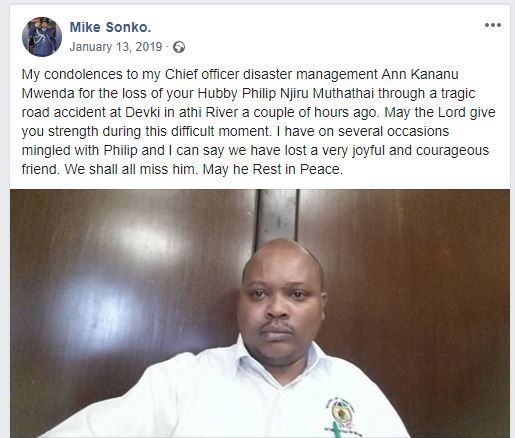 She holds a degree from Dedan Kimathi University

According to Anne’s curriculum vitae, she successfully pursued an undergraduate degree in Criminology and Security Management at the Dedan Kimathi University of Technology (DEKUT) and graduated with Second Class Upper Division honours.

She also holds a diploma in Criminology and Security Management from St. Paul’s University and is trained in Human Resource Management and Public Relations.

She also holds a certificate in Crisis Management from AVSEC and has been trained by the US Department of Homeland Security in Man-Portable Air Defence Systems.

She cleared her 0 levels in 1999, at Our Lady of Mercy High School.

She served in modest roles in the past, including working as a switchboard operator, a personal assistant and a customer service manager at different institutions.

On Apr. 19, 2018, Anne was vetted by the Nairobi County Assembly and consequently approved to take charge of the Disaster Management Office at City Hall as the Chief Officer.

She has been serving in this capacity until her deputy governorship nomination on Monday.

Before joining City Hall, Anne was an employee of the Kenya Airports Authority, working as a Security Supervisor in charge of Quality Control and Training.