After spending close to two years in a foreign country, following his dramatic deportation in 2018, embattled lawyer Miguna Miguna is counting hours before he lands in Kenya, a country he loves to refer to as his motherland.

This time around, things are looking up for the political activist, who was deported for a second time in March 2018, just hours after his attempted return following his February ouster, the same year.

On Monday, the government through the Directorate of Immigration Services issued a statement expressing its readiness to facilitate Miguna’s return home as per court orders dating as far back as 2018.

The former National Super Alliance (NASA) enthusiast’s homecoming is, however, not a tale of overnight success.

Even before he was kicked out of the country in March 2018, Miguna had sought the help of the court in putting an end to his deportation woes, but he was still sent to Canada as the government blatantly ignored court orders on the illegality of his deportation.

On Monday, the lawyer, ahead of his Jan. 7 return, took to social media to acknowledge his legal representatives who helped fight the battle against the State on his behalf, which he finally won, with the High Court’s Monday orders to the government, on his unconditional return.

“Thank you to Dr John Khaminwa, Valentine Khaminwa and Jeremiah Otomwa and the team of lawyers at Khaminwa & Khaminwa Advocates,” Miguna wrote in a flurry of tweets addressing his Tuesday date with fate.

” The pursuit of truth and justice is reserved for the fearless, righteous and those with integrity,” he added. 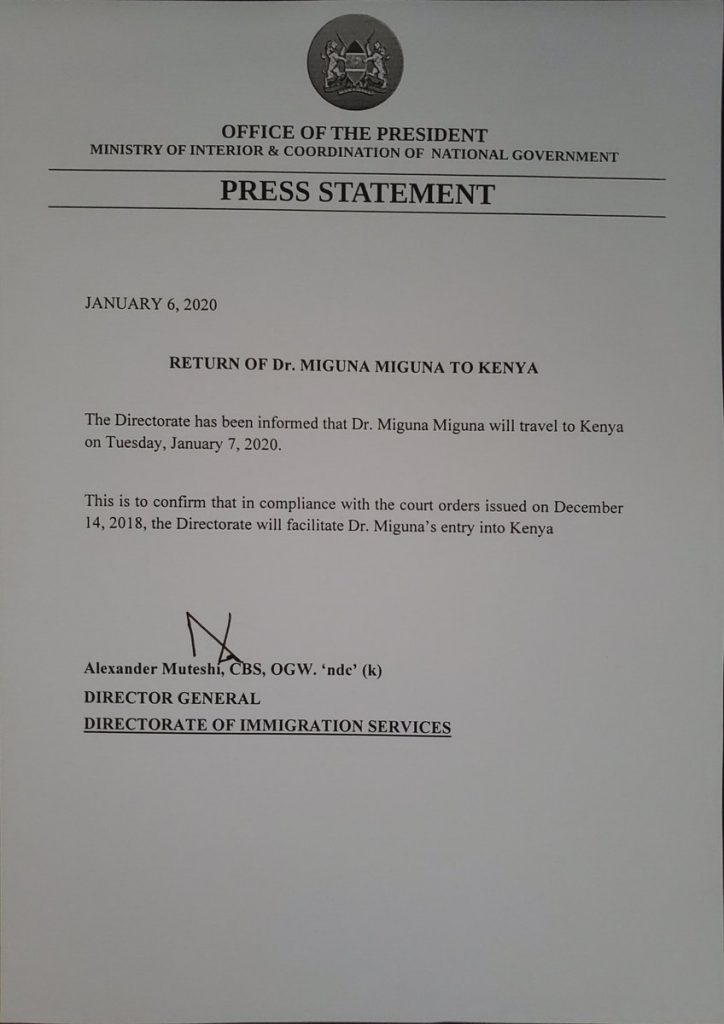 Other legal powerhouses associated with Miguna’s battle with the government include city lawyer Nelson Havi, and Toronto based Courtney A Kazembe.

According to the former Nairobi County gubernatorial aspirant, the government had no right to deport him from Kenya and acted contrary to his birth and Constitutional rights.