Two airlines have so far cancelled all flights to Lamu following a Sunday dawn attack by Al- Shabaab militants at Manda airstrip.

The two airlines, Fly540 and Skyward Express said, in a notice to their customers, that all flights to and from Lamu have been cancelled until further notice.

“Please note that Manda Airsport has been closed till further notice. All flights to and from Lamu are hereby cancelled,” Fly540 said in a statement shared on twitter.

“We regret to inform passengers traveling with us in and out of Lamu that the airport has been closed until further notice.” Reads a tweet by Skyward Express.

We regret to inform passengers traveling with us in and out of Lamu that the airport has been closed until further notice.

The airstrip was closed indefinitely following an attempted attack by Al Shabaab.

The militants on Sunday morning launched an attack at the Manda airstrip which is adjacent to Camp Simba military base that hosts KDF and U.S forces. 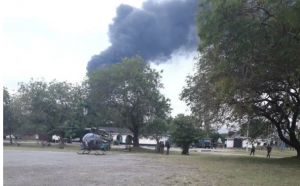 Colonel Njuguna confirmed that four terrorists were killed following the 5:30 am raid.

“This morning at around 5:30 am an attempt was made to breach security at Manda Air Strip. The attempted breach was successfully repulsed. Four terrorists bodies have so far been found. The airstrip is safe,” he said.

The Al-Shabaab militants were attempting to gain access to the joint military base through the Manda Air Strip.