The National Police service on Tuesday released a list of three most wanted individuals linked to criminal activities.

According to Inspector General of Police Hillary Mutyambai, the three Arafat Kyalo Masai, Juma Waziri, Salim Mohamed Ahmed are linked to criminal gangs and are said to be armed and dangerous. 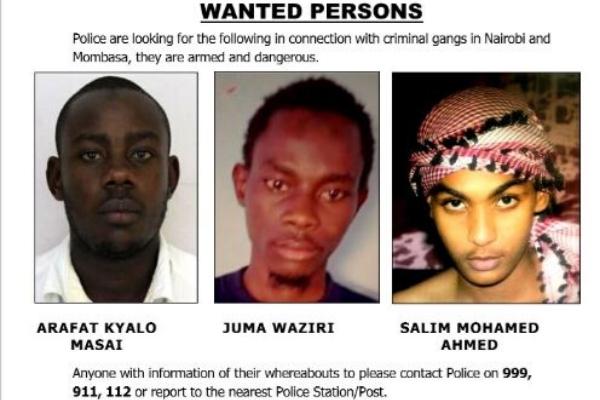 The three are said to be conducting criminal activities in Mombasa and Nairobi.

Police have urged anyone with information that will help in tracing them to call 999, 911 or 112 or report to the nearest police station.

The announcement comes a month after police nabbed several suspects in Mombasa linked to a criminal gang dubbed 86 battalion.

The machete-wielding gang was accused of attacking several residents leaving them nursing injuries.

In November, ten people, most of them businessmen heading to Kongowea market, were injured in early morning attacks in Kisauni and Nyali constituencies by machete-wielding criminals.

11 suspects were later arrested in connection with the  attack.