But now times have changed! People are confessing how many men/women they have slept with. It has become more of showing off and ‘making one’s self-esteem shine’ as some men say. Last year, radio presenter Kamene Goro surprised us after revealing her body count to the public. She had confessed her body count was 27.

After her confession, people began coming clean about the number of men/women they have slept with.

Recently, a man identified as Samson Mchelsea shared a post on Group Kenya that he has slept with 35 men and Kenyans were so salty in the comments. 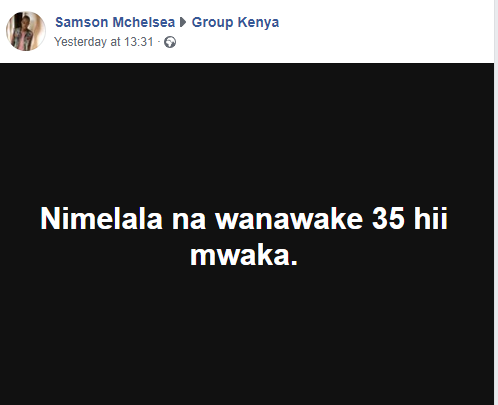 Janet Mwimbi:35 only for a whole year!!Uko down sana if you can still count and get the number. Try harder next year till you lose count.

Giddy Akali This is not something to rejoice

Kaloki Richard Those are 35 demons in you the reason you are exhibiting signs of madness.

Michael Maeracongratulations next year double the number as you go near your grave.

Nyakundi JayNothing to be happy about. It shows you have low self-esteem and identity crisis hence can’t keep a woman! Fikisha 100 next year.

Mwanalizombe Haydn Adrians You have sealed 35 covenants.
Divi Nah So tukuchinjie ng’ombe ya green ama?
Suzzy Sue So how do you want us to help you?????
Shaaban DaudThis is one of the reason that I suspect you’re one of the less intelligent Kenyan alive;
*If you had paid ksh 500 for hotel room 35 times during the shagging session you spend ksh 17,500
*If you paid the slags equally ksh 500 you spend ksh 17,500,…
Favored LisaAt least you will tell Jesus how active you were and produce certificate for it to hell fire
To find more hilarious comments, check this link;
https://www.facebook.com/100005647368706/posts/3438361316258739/?substory_index=47