Joe Willock says he’s delighted that Freddie Ljungberg has been handed the reins at Arsenal having developed a close relationship with the Swede in the last 18 months.

Like his mentor, the midfielder was formally promoted to the first team in the summer; one of a number of Academy graduates that developed last season at under-23 level under the watchful eye of the former Invincible. 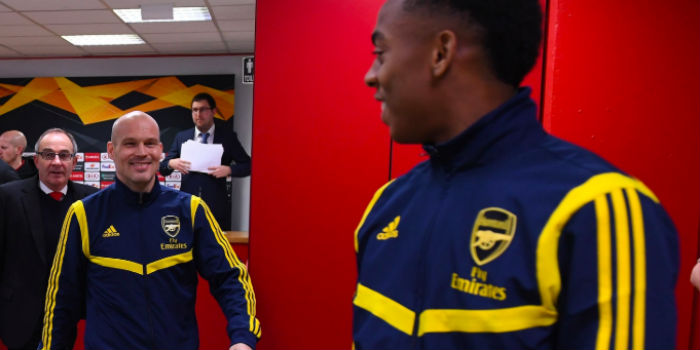 Ljungberg’s strong ties to the Academy are set to come to the fore this evening with at least seven youngsters selected to travel to Belgium to take on Standard Liege in the final match of the Europa League group stages.

Ahead of the game, Willock joined Freddie at his press conference. “Freddie is good at relating to the players because he’s done it, he’s worn the shirt and he knows how it feels to be in our position,” said Willock.

“I worked with Freddie last year with the under-23s and he taught me a lot. Not only on the pitch, but off the pitch as well. He’s like a mentor for me.

“So I’m delighted that he’s in the job now. It’s good for me and I’ll just continue working hard and working with him and learning from him.”

Arsenal needs only to avoid defeat to confirm their entry into the knockout rounds of the competition. The match will be followed by a highly awaited Premier League match against Manchester City at the Emirates Stadium on Sunday.