Lady Justice Roseline Aburili on Tuesday ruled that the two,Victor Ogola Luta and his brother, Franklin Joel Luta, to be held at Siaya Police Station.

Aburili also ordered that the suspects be taken to Jaramogi Oginga Odinga Teaching and Referral hospital on December 17 to undergo a mental examination.

She further ordered that the accused be provided with a lawyer after the duo said they could not afford to hire one to represent them. 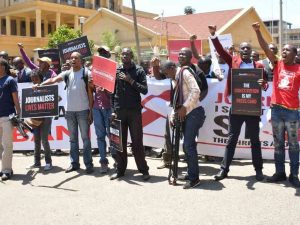 The suspects were arrested three weeks ago following the murder of the journalist.

The scribe’s blood-soaked body was found lying on a bed inside a house he shared with Sabina Kerubo, a police chief inspector attached to Ugunja police station, with whom they were living as husband and wife.

Kerubo was also arraigned before Siaya Principal Magistrate’s court but she did not take plea, instead, the police asked for more time to enable them to complete investigations.

Principal magistrate, James Ong’ondo ordered that she be detained for 14 days and she is expected back in court on Monday, December 16.