Murkomen, who is a lawyer by profession, was among the many people who flocked the court on Monday morning as the governor was being arraigned.

The senator was joined by BabU, who during the session, was seen engaging and exchanging notes with the Senate Majority leader, who was seated at the front with Sonko’s defence team.

The governor, who was arrested on Friday in Voi, seemed calm as the court led by Senior Magistrate Douglas Ogoti read out different graft related charges.

Murkomen and Owino’s presence at the court comes just days after the two condemned the manner in which the governor was arrested and manhandled.

Through his Facebook account, Babu wondered why the police decided to arrest the governor in the most inhuman way adding that Sonko was a public office holder hence deserved respect as far as his arrest was concerned. 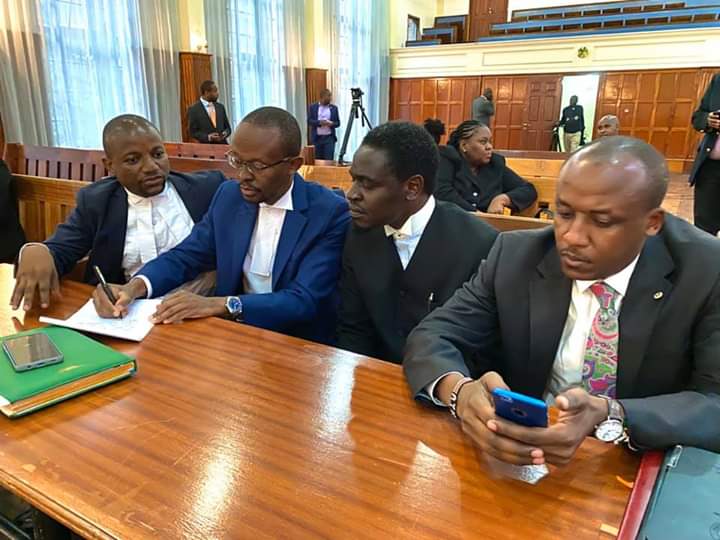 While observing that one is always innocent until proven guilty, Owino called on the law enforcers to arrest a police officer who was captured on camera ‘assaulting’ the governor during Friday’s arrest.

“The Police ought not to have manhandled Governor Sonko who is an elected leader. The police officer who assaulted Sonko must be arrested. One is innocent till proven guilty as envisaged in the Apex of the law (constitution of Kenya 2010),” posted Babu on Sunday.

In the last three months, I have been summoned by the EACC four record times, where I have faithfully honoured all the summons.

On his part, Senator Murkomen also blamed the government for alleged political witchhunt, adding that other governors from Mombasa, Machakos, Siaya had also been mentioned in different graft cases but so far, no action has been taken against them.

Murkomen lamented that the governor was entitled to his constitutional right which states that every accused person is innocent until proven guilty by the court of law.

“Gov.Sonko enjoys his Constitutional right to be presumed innocent till proved guilty. He is my friend & I wish him well as he proves his innocence. You don’t run away from friends. I also know many governors; Mombasa, Machakos, Siaya etc who are protected coz they are politically correct,” posted Murkomen on his Twitter account.

Later in the day, Sonko is also expected to appear before the Voi Law Courts, Taita Taveta County, to answer to charges of assault.

According to reports from the police, the city governor will be flown to Voi later in the day to take plea in a case where he is accused of assaulting Coast regional police commander Rashid Yakub.