With just two years remaining before the country heads to the polls to elect the next political leaders, the presidential seat has attracted a lot of interests with Deputy President William Ruto, who has openly declared his interest, finding himself at the centre stage.

Ruto, who is expected to square it out with other political bigwigs for the top seat has widely been accused by a section of politicians of leading early campaigns contrary to President Uhuru Kenyatta’s warning.

And to add water on Ruto’s 2022 already slippery path, Kenyans on Twitter, on Monday, joined hands to mock his presidency under the trending twitter hashtag #KenyaUnderRuto. 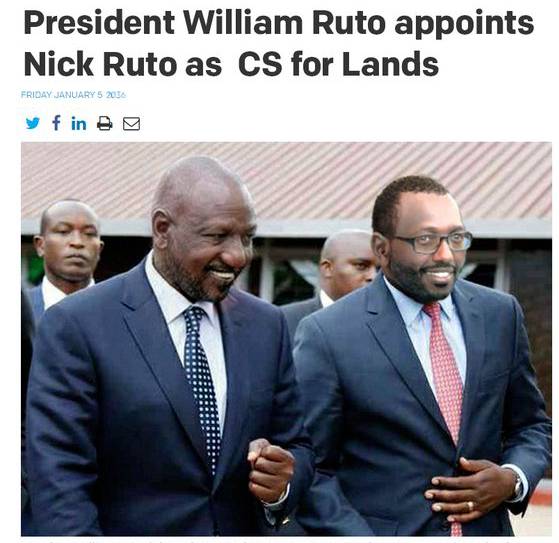 Many believed that Ruto’s presidency will spell further doom on the already ailing economy, with some quoting past instances where the DP was mentioned in relation to a number of graft cases in the country.

One man @WilliamsRuto can not ruin our lives for his selfish interests #KenyaUnderRuto pic.twitter.com/viEUHajmY7

Kenya 🇰🇪 under Ruto, mtaitana. This guy is corrupt to the core.
This is how you will be transacting with Banks. #KenyaUnderRuto pic.twitter.com/NHVpq94bMa

Some opined that Ruto will use favouritism in his tenure with most of his kinsmen and close friends set to benefit the most once he takes over as the president.

#KenyaUnderRuto
His children will take over key ministries in the government pic.twitter.com/0jpJJtCbQZ

after eating the economy,…ruto goes ahead to pretend that uhuru has failed…he has not Uhuru has been sabotaged politically #KenyaUnderRuto pic.twitter.com/roPAPtzSh9

My Humble Request to the President of the Republic of Kenya Uhuru Kenyatta, since Ruto has decided to oppose you just remain silent on it.

Come 2022 use State Machinery/System to send him home for good, kwani hiko nini.
This is Kenya and Kenya is our Business.#KenyaUnderRuto pic.twitter.com/D87C7qUqk9

Court cases, like that in the ICC where the DP alongside President Uhuru and others were judged with committing crimes against humanity in the aftermath of 2007-2008 post-election violence, did not go unnoticed as well.

He sanctioned killing before be sure he will do it again.#KenyaUnderRuto pic.twitter.com/FbXlSIfWii

It has already started @WilliamsRuto Is trying to divide Kenyans yet Again #KenyaUnderRuto pic.twitter.com/4HVfhoTs7s

We all saw what the tanga tanga fools were doing. Beating up the other supporters. Kenya tutaishi ivi kweli? #KenyaUnderRuto pic.twitter.com/dZ6QzVqjMs

There were also those who chose to remain neutral, castigating the three; President Uhuru Kenyatta’s government, Raila Odinga and William Ruto for failing to improve the country’s economy.

Kenya failed under Jubilee.
Kenya is failing under the Handshake.
Kenya would fail under BBI.

Colonialists saw the danger of tribeless politics when Harry Thuku formed a national outfit in 1921, the EAA. In 1922, they deported him to Kismayo, Somalia. Then they decided to allow tribal associations only. We still support tribal kingpins today, what a shame. #KenyaUnderRuto pic.twitter.com/vNqIJLa7Yu

While many were busy expressing their views on how the country will be under Ruto, others refused to imagine that the self-proclaimed hustler will one day be the head of this country.

They cited a rise in tribalism, nepotism, as well as corruption, as some of the cases they will never allow the son of Sugoi to lead Kenya.

Why do you even imagine that Kenya could be under Ruto , we are not willing to betray our independence which was fought for by our great heroes , It will be the worst state ever , Tribalism will rise , Followed by nepotism and upgraded level of Corruption!! #KenyaUnderRuto

However, a good number of users were of a contrary opinion, rubbishing those who were busy poking holes on Ruto’s ambitions.

According to them, Ruto’s critics were only full of jitters since his influence across the country was fast rising. They maintained that Ruto was destined for greatness and that the current intimidations were not going to stop his bid.

Hahaha!!!
Wachawi Wameamka Shouting Ruto This Ruto That. Dp Ruto Has A Loyal Team Behind Him,No Man in this Land Will Stop Dp Ruto he Has The Numbers,Mps Allied To Ruto Are 197 Do The Maths.
Continue Shouting While Dp Is Forming his Empire.
Sisi Tuko Na Ruto.#KenyaUnderRuto pic.twitter.com/GghG2YKhhe

The Hustler Nation will be powered by the Hustler Philosophy. A Republic of Hustlers, By Hustlers, For Hustlers.

While Ruto may be seen as the most corrupt politician,let us not forget that the Kenyatta clan are by far the masters in this game, and that Raila..I don’t know what Raila stands for anymore #KenyaUnderRuto pic.twitter.com/DfczwM7DQ0

Others insisted that the hashtag had been sponsored by some political competitors who were keen on bringing Ruto down.

For how long will Kibicho sponsor hash tags to fight the 5th President? #KenyaUnderRuto pic.twitter.com/BY3LFeffT8

Ruto is the most hard working government servant. We are proud that our candidate 2022 has no one close to match. #KenyaUnderRuto pic.twitter.com/n226As9eBy