A contingent of police officers has been deployed around Milimani Law Courts just hours before Nairobi Governor Mike Sonko is arraigned in the court.

This followed an earlier warning by the police that nobody or any group would be allowed to hold unruly demonstrations around the city over Sonko’s arrest.

In the statement, police indicated that any planned picketing or demonstration by the general public must be done within the confines of the law.

By 6 am on Monday morning, heavy security was already at the ground, directing all road users along Ngong road to use alternative routes away from the ones leading to the court. 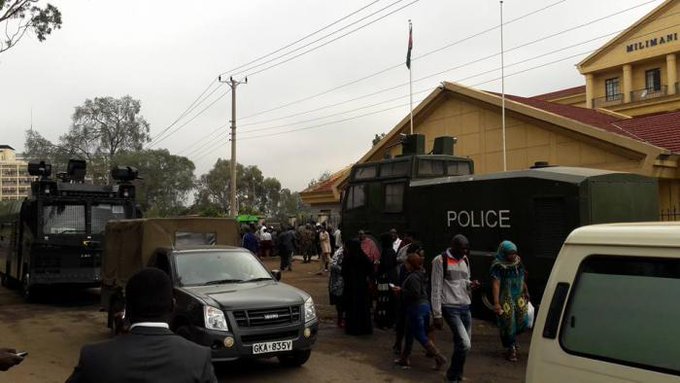 The police could only allow those who work at the Ngong road-based court to access the route with any other person being directed to use alternative roads, as one way of ensuring that the court area remains free from any kind of unwanted demonstrations.

At the same time, over 150 police officers have also been deployed in Voi town to curb any protests likely to happen when the governor is presented before Voi Law Courts.

According to reports from the police, the flamboyant governor will be flown to Voi in the morning to take plea in a case where he is accused of assaulting Coast regional police commander Rashid Yakub during his arrest on Friday in Voi.

This comes after allegations that Sonko, during his arrest, became extremely violent, raining blows on the police boss and uttering unprintable insults which led to some commotions witnessed between the governor and the seemingly irritated Rashid.

In a statement signed by National Police Service director of corporate communication Charles Owino, Sonko will be charged with assaulting a police officer on duty as well as destroying media equipment during his dramatic arrest.

He will also be expected to be charged with two other counts of obstructing lawful arrest and offensive conduct after which the governor will be flown back to Nairobi to face corruption charges.

The governor was arrested on Friday in Voi onboard SGR train after an order by Director of Public Prosecutions to arrest Sonko and other Nairobi county staff over graft and abuse of office.

On Sunday, governors, through CoG chairman and Kakamega Governor Wycliffe Oparanya, urged President Uhuru Kenyatta to convene an emergency summit with all the 47 governors in a move to address the evolving situation.

Governors together with a section of leaders have rubbished reports that their counterpart was arrested while running away from arrest, with some of the leaders reading a political witch hunt in Sonko’s arrest.