Youths in Nyeri to were on Sunday afternoon captured setting Uhuru-branded shirts on fire.

The shirts, written ‘Uhuru’s Bedroom’ were set on fire one by one as the youths cheered while singing pro-Deputy President Ruto slogans.

According to Nyeri town MP Ngujiri Wambugu, the goons had been paid by Ruto’s allies so as to perpetuate the acts. 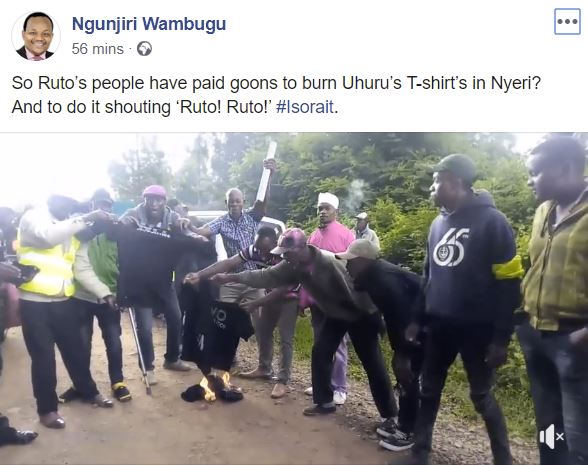 This happened amid an anticipated visit by the Deputy President who is said to be attending an event at AIPCA Mukaro Church on Sunday afternoon.

Contrary to Ngujiri’s claims, Gatundu South MP Moses Kuria had earlier claimed that there was a plan to disrupt DP Ruto’s function.

According to Kuria, Cabinet Secretary for Interior and National Coordination Fred Matiangi and his Principal Secretary Karanja Kibicho are the masterminds of the planned attack.

Kuria and Ngujiri are political opponents within the Jubilee Party with the former being a DP Ruto ally (Tanga Tanga) and the later being on President Uhuru’s side (Kieleweke).

On the other hand, Kenyatta attended a Sunday mass at St.Francis of Assisi Catholic Church Parish in Ruiru which was to be accompanied by a funds drive for the completion of the church sanctuary.

Sunday is never a dull day in the Kenyan political scene as politicians take advantage of the popular worship day to parade their agendas to worshipers.

The Deputy President is one mastermind of church politics as he barely misses a church service every Sunday.

Although his church politics has been under criticism by his political enemies, he still holds on to it.