Nairobi Governor Mike Sonko was arrested on Friday in Voi hours after the DPP ordered his arrest.

Sonko, unlike his usual mood, appeared dejected during his arrest even at some point crying as captured in a video seen by Opera News. 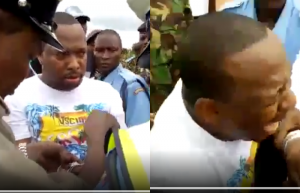 In the video in what seemingly looks like kicks of a dying horse, He wails as the police officer cuffs him.

He goes on ahead to even curse at one police commander who gets irked by his behaviour and almost engages Sonko in a fistfight but is restrained by his colleagues.

The governor in the video is surrounded by more than 10 officers. Some officers are in traffic policemen duty gear suggesting that the arrest was not effected by a specialised unit.

#Sonko screams after being handcuffed. 😂🤣😂 pic.twitter.com/Xiki2d3P2K

In the clip, it is unclear who are his guards.

While the officers surround him, others keep a safe distance, perhaps avoiding the ensuing melee.

Sonko landed at Wilson Airport onboard a police chopper at around 2:30 pm.

The governor was airlifted from Voi to Nairobi, where he was taken to the Ethics and Anti-Corruption Commission headquarters.

During a press conference in Nairobi, Haji announced that the governor would be questioned over the loss of Sh357 million of county funds.

This comes a few weeks after Sonko failed to stop the Ethics and Anti-Corruption Commission (EACC) from investigating him over corruption.

The agency is also investigating the governor over alleged past criminal records.

Sonko will spend the weekend behind bars after a judge declined to grant his request for anticipatory bail.

The governor, through his lawyers led by Cecil Miller, had filed an application under a certificate of urgency seeking anticipatory bail.