Nairobi Governor Mike Mbuvi Sonko and Woman Representative Esther Passaris earlier today, Monday, December 2, put aside their political differences as they participated in an exercise to reduce the carbon footprint in the capital.

According to photos seen by Opera News, the two seemed to be in good terms as they rode bicycles together with other United Nations officials and diplomats.

“Earlier today, I took part in the high-level bicycle riding in Nairobi together with UN officials and Diplomats,” Sonko said when he posted the photos on Twitter. 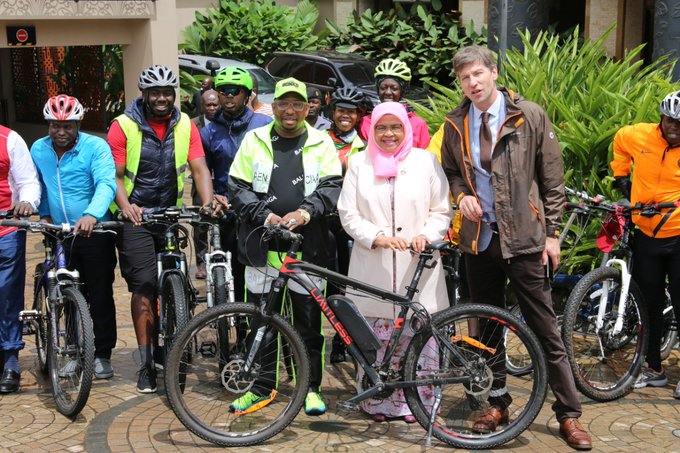 “The initiative is aimed at promoting non-motorized transport in Nairobi in order to reduce our carbon footprint.”

The controversial governor, who addressed the delegates, said that his administration had made it mandatory for all new roads to include a provision for cycling lanes and footpaths.

He also stated that his government was working on a road usage and safety campaign to ensure motor vehicle drivers accord cyclist the rights they deserve to reduce the number of road accidents involving cyclists and pedestrians.

Earlier today, I took part in the high level bicycle riding in Nairobi together with UN officials & Diplomats. The initiative is aimed at promoting non-motorized transport in Nairobi in order to reduce our carbon footprint. pic.twitter.com/tonEBDDsZw

However, a number of Kenyans were not convinced that the governor’s move would materialise to anything meaningful given that the matatu madness and a lack of enough pedestrians/cyclists pavements.

“I will do that when there is no single matatu in Nairobi.. The insanity I these drivers is beyond acceptable level..[sic],” vented Ndirangu Macharia.

“What is this cartoon of a governor up to now. He want us to cycle in which roads?? Yeye na UN wapeleke ujinga mbali,” said Gitau.

A few, however, praised Sonko’s seemingly noble cause that would ultimately reduce congestion in the CBD.

“Besides its health benefits, cycling is a good way to decongest the city of most cars that make traffic a nightmare in Nairobi. Most European capitals are a testament to this specifically Helsinki, Finland. (BTW that is not a suggestion for your MCA’s to go benchmarking there) [sic],” said Stanley Masila.

“Finally! Now, all you need to do is to ensure parking fee is tripled to reduce the number of cars that get to CBD and traffic will be a thing of the past,” added Christine Njogu.