The World Bank has applauded Kirinyaga County Government for good performance in the implementation of projects funded under the Kenya Urban Support Program (KUSP).

The county’s Kerugoya/Kutus Municipality is among the seven municipalities, out of 59 across the country, which has met the World Bank’s minimum KUSP grant conditions and qualified for a second-round grant.

During an implementation support mission to the County, World Bank’s Urban Specialist, Davison Muchadenyika, said that he was impressed by the implementation progress of the first phase projects hence the continued partnership. 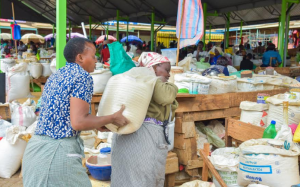 The first phase involved a grant of Sh. 71.3 million that went into infrastructural projects that include cabro paving in Kutus, construction of Kerugoya fresh produce market shades and construction of a Daycare center for mothers working in the County’s ‘Wezesha Mama’ Apparel Factory located in Kerugoya town.

Muchadenyika said that the main objective of the mission to the County was to review implementation progress achievements and challenges and also finalize the second Annual Performance Assessment results in the preparation of the next disbursement for qualifying counties.

Governor Anne Waiguru said that such partnerships were important in achieving the development agenda of the County.

She said her government was committed to continually improve the county’s infrastructure as an enabler to social-economic development and improved livelihoods of all residents.

KUSP Project Coordinator, Eng. Victor Ogutu, who was also in the mission, appreciated the county’s good working relationship with the Kerugoya market traders, saying it implemented the program run smoothly. No trader was displaced during the construction of the market.

Kerugoya Open Air Market Chairman, Samuel Mwangi, told the delegation that the market will be of great benefit to the traders who have had to endure selling under adverse weather conditions such as sun and rain.

The traders have been using umbrellas for shade which they have had to change from time to time since they wear out quickly due to sun.

The Chairman thanked the County Government for the market that will accommodate more than 1,200 traders, adding that they will also be able to transact business at night since the market will have a lighting system. 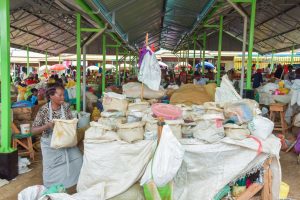 The Market’s Secretary, Janet Kibuchi, said that the market shades were Godsend, especially to women who will not have to worry anymore about rains or sunshine.

The second phase of KUSP will involve expansion and improvement of Kerugoya Town parking spaces, access roads, pedestrian and not motorable ways, drainage and landscaping of Kerugoya Hospital frontage.