President Uhuru Kenyatta and ODM leader Raila Odinga finally got their hands on the BBI report.

The much-anticipated document was presented to the two leaders by the head of the taskforce team Garissa Senator Yusuf Haji.

Among the leaders present during the function was Deputy President William Ruto who has been greatly portrayed as anti-BBI. 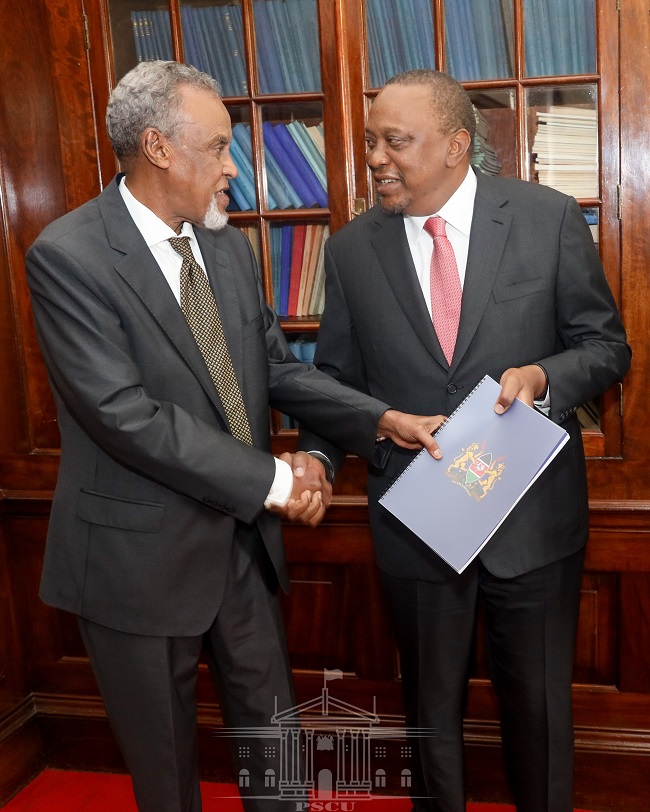 The manner in which the event was conducted left many puzzled as it was anticipated to be a huge ceremony with a bunch of dignitaries set to attend.

A lot of Kenyans anticipated that the event would be televised as it is considered a historic moment for the nation.

It seems though Kenyans have to wait for another 24 hours, to be brought on board in regards to the contents of the paperwork that has sparked divisions across the country.

Details emerged that County commissioners were tasked with sending invites to MPs.

In a twist to the move, a section of leaders from Ruto’s camp claimed that they have been overlooked for the Wednesday event at Bomas of Kenya where the project will be availed to the citizens.

Ruto’s allies such as Bahati MP Kimani Ngunjiri who is among the leaders shunned from the forum, alleged that it was a plot to have them made the laughing stock of the meeting.

The embattled Kimani asserted that the tricks employed by those in charge were similar to what happened during the Sagana meeting made possible by President Uhuru.

The lawmaker’s sentiments were echoed by that of his counterpart Tetu MP James Gichuhi who also expressed his desire to skip the event to avoid being shamed.

Nelson Koech who is the representative of Belgut, commented that he was not invited to the function.

He further uttered that no one from his area had also been given the opportunity to be part of history despite the news that invitations were sent to other political leaders.

Unlike the three, Oscar Sudi, Kapseret MP, affirmed that he wanted no part in the occasion.

A staunch supporter of the DP, Majority Leader of the Senate Kipchumba Murkomen on his part proclaimed that he had no knowledge of the call for the leaders to attend the function.

Murkomen highlighted that his concern at the moment was helping the people of West Pokot county who were ravaged by the landslide that claimed the lives of over 50 people on Saturday.