Somali camel herders who had invaded Kitui County from neighbouring Garissa and Tana River counties have been flushed out of Kitui county back to their respective counties by security officers.

While speaking to KNA on Monday in His office at Kitui Town, Kitui County Commissioner John Ogendo said that security officers from General Service Unity (GSU) were deployed to drive away the camel herders, and that the officers were currently camping at the border of Kitui and Tana River counties to ensure the camel herders would not return.

“The camel herders have been passing through Tsavo East Game Park to access our county and we are working closely with Kenya Wildlife Services to put up a perimeter electric fence at the park to ensure the herders do not enter into our county,” said the County Commissioner.

After flushing out the Somali herders, the GSU officers also flattened their settlements in Enyali, Inyaanzai and Kalalani, all in Kitui County. 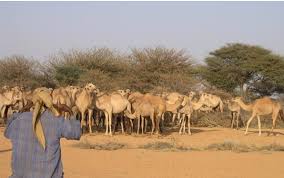 “We have long plans that will keep off the Somali camel herders from entering into Kitui County now and in future,” said Mr. Odengo adding that his security team would draw a cutline along the Kitui County with his neighbours Tana River and Garissa counties.

The flushing out the Somali herders comes in wake of outcry by local political leaders over insecurity from conflict between the armed Somali herders and farmers resulting to killing of scores of farmers and others farmers fleeing the areas.

Last September, Kitui governor Charity Kaluki Ngilu was seen at a local television station threatening to arm the area residents with fire arms if the government failed to flush out the Somali camel herders from the area.

While addressing media in Kitui town, Mbai said his electorate and also those in Kitui South Constituency were living in makeshift IDP camps after they fled from their homes due to recurrent attacks by the Somalis and yet CC Odengo had not address the problem.

“Mutha, Endau and Kyamatu areas have been under recurrent attacks by Somali camel herders killing and injuring some of the residents,” said the MP.

Government representatives led by Cabinet Secretary Fed Matiang’i, Inspector General of Police and head of DCI, DPP and also Parliamentary Security Committee visited the area in September this year following the outcry over the conflict and displacement of local farmers who had fled to IDP camps.

During the visit to the area, the top government security officers promised that action would be taken to end the attack, thus resulting to the flushing out of the herders.

The County Commissioner confirmed that security had been restored while the hostile Somali camel herders have been driven out of the county.