On Friday, The Standard newspaper ran a seemingly ‘screaming headline’ questioning whether Nairobi Governor Mike Sonko was the most dangerous man in Kenya.

The publication had its cover page painted with the Governor’s picture and titled it: “Is Sonko the Most Dangerous Man in Kenya?”

The story depicted Sonko-led county in a big mess citing a series of unconstitutional actions, mismanagement of the county, his rogue personality among other gravy things. 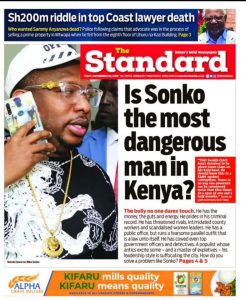 According to the newspaper, ranging from Sonko’s tact of intimidating workers, disrespecting women, bullying his officers to a wide range of corruption allegations, the county boss has apparently left the city on its deathbed.

Notwithstanding a series of seemingly factual reporting depicted in the story, Sonko, unbowed as usual, rebutted with a dossier that is common of him.

“I wish to first start by thanking this newspaper owned by a son of a former President who managed to finish “corruption” in the country.

“What some of the unprofessional gutter press and media houses being used don’t know is that the more they direct this war at me, the more they make me even stronger.

“Let it be known that no amount of sponsoring of newspaper headlines…,” wrote Sonko on his Facebook page on Friday”

The Governor, in his tirade directed at the newspaper, sarcastically admitted that indeed he was the most dangerous person.

In a series of points, he highlighted in his post-Sonko cited his developments projects to justify that indeed he was the most dangerous man.

“Yes, I am dangerous because during the previous years before I became the Governor, Nairobi used to be among the top 3 most corrupt counties in the EACC list of corruption survey analysis.

“Today I am shocked that according to their own survey on corruption analysis of 2018 released 2 days ago by the EACC commissioners at the illegally acquired Integrity Centre, Nairobi is not even in the list of top 20 most corrupt counties.

“This is a very positive achievement, however, no gutter press including the Standard would publish it because they are being used by cartels to divert attention,” wrote the governor.

Relentlessly, the Governor continued highlighting his achievements in all appearance to give a stark juxtaposition between the newspaper reporting and the reality, according to him.

“I’m dangerous coz I was awarded an honorary membership by the International Police Association (IPA) by virtue curbing crime in the City and helping the less fortunate in the various communities without discrimination,” added the Governor.

The war of words between the governor and the Standard newspaper comes barely a day after Nairobi Senator Johnstone Sakaja and a host of MPs castigated Sonko for failing to deliver on his mandate.

The leaders expressed reservations on a number of issues pitting the governor and demanded that he concentrate on delivering quality services to the people of Nairobi county.

YES I AM THE MOST DANGEROUS MAN TO THE CARTELS, THE CORRUPT, THE LAND GRABBERS AND THE LAZY.Today Kenyans woke up to a…