The US government has profiled at least 10 leaders for sanctions among them a senior Jubilee politician for alleged corrupt activities.

Travel bans for those in the list could be issued anytime, according to diplomats based in Nairobi.
“The bans are aimed at supporting Kenya’s fight against graft,” a senior diplomat told the Star
The profiling intensified almost two years ago as the Americans collected data from the Ethics and Anti-Corruption Commission and court papers presented by the office of the Director of Public Prosecutions. 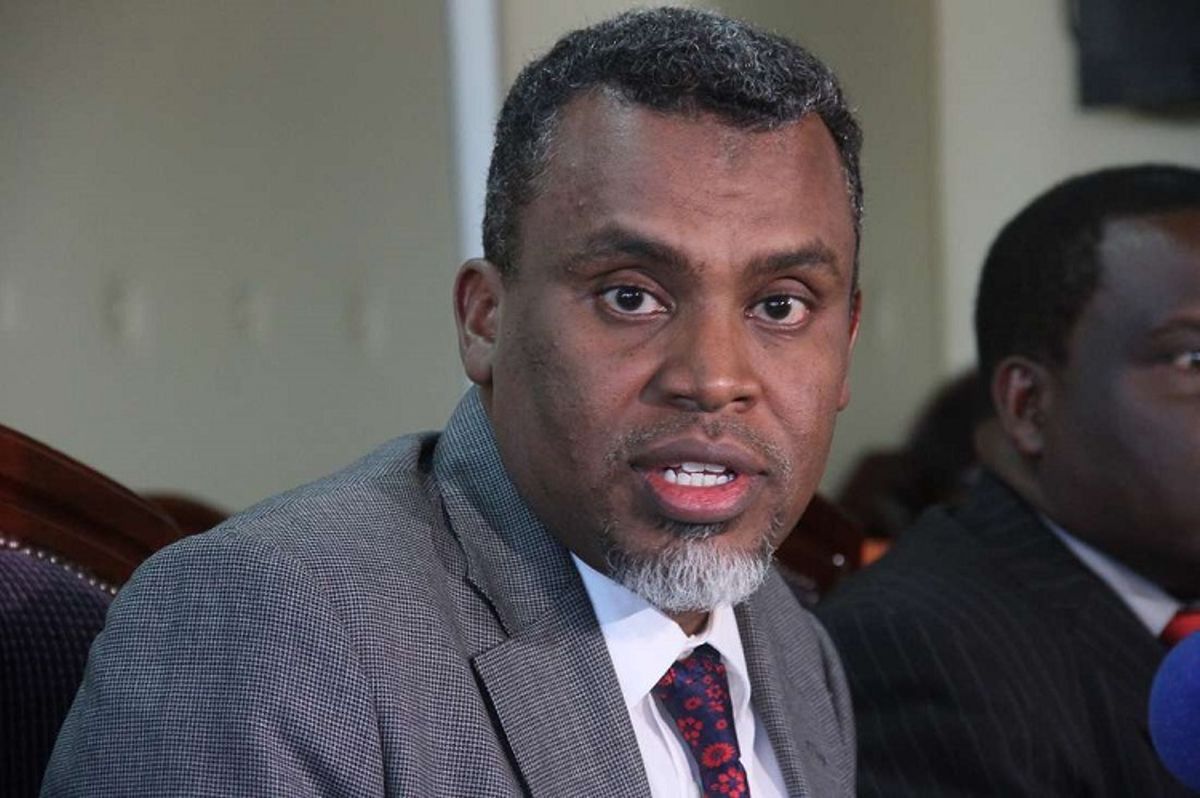 In July this year, DPP Noordin Haji met western diplomats based in Nairobi and asked them to bar Kenyans charged with corruption from travelling abroad.
“The DPP shared a list of persons charged with corruption with a view to restricting them from travelling to those countries,” Haji said after the meeting.
Before the meeting, the DPP and DCI George Kinoti had travelled to the US where they held meetings with senior American officials to discuss co-operation plans.
Both the US and the UK pledged to help in the war on graft by issuing travel bans against suspects.
The US announced on Monday that it banned Busia Senator Amos Wako from travelling to the US for “engaging in corrupt actions”.
Also slapped by the ban were Wako’s wife Flora Ngaira and his son Julius Wako. Senator Wako flew back to Nairobi from Kampala yesterday and is expected to issue a statement today
Today’s action sends a strong signal that the United States is a valuable partner in Kenya’s fight against corruption,” U.S Secretary of State Mike Pompeo said.

He added, “Economic prosperity for all Kenyans is only possible by defeating the scourge of corruption, which also requires a functional, fair, and transparent criminal justice system. The United States will continue to stand with all Kenyans as they strive to curb and punish corruption in Kenya.”
This is the second time the Americans have slapped Wako with a travel ban.
The US also issued a travel ban against Wako nine years ago and the former Attorney General has since been elected senator twice.
The ghosts of multibillion scandals that nearly sank Kenya to its knees could have crept back to haunt Wako nine years after his exit from the State Law Office.
The ever-smiling Wako is the first casualty of the renewed graft cooperation between Kenya and the US.
The public shaming of Wako, a prominent member of the Building Bridges Initiative, sent shockwaves across government that more visa bans were in the offing.
First to send signals that it would not be business as usual with the Donald Trump administration was new US Ambassador Kyle McCarter.
Top government officials in President Uhuru Kenyatta’s administration have been implicated in graft, among them immediate former Treasury CS Henry Rotich.
The US did not, however, say exactly why they had slapped the travel restrictions on Wako, only saying citing what they termed as “significant corruption”.
Wako did not respond to our inquiries at the time of going to press.
However, Wako was adversely mentioned during investigations into the multibillion Goldenberg and Anglo leasing scandals.
Wako denied any wrongdoing in the scandals and threatened to sue for adverse mentions.
His acts of either omission or commission were cited as having contributed to the success of the Goldenberg scam which was executed during the 1990s.
A report sent to Washington in 2009 by the then US Ambassador to Kenya Michael Ranneberger, and which was captured by Wikileaks, revealed that investigations had linked Wako to the two scandals.
According to the Golden Berg Commission of Inquiry report, the ex-AG was highlighted for personally frustrating efforts to prosecute the architects of the scandal that cost the country Sh5.8 billion.
In one instance, the report observes, Wako moved to court several times and successfully managed to block private prosecution of the suspects including thwarting litigation by the Law Society of Kenya in 1994.
The LSK had moved to court to sue key Golden Berg suspects Eric Kotut, Charles Mbindyo, Collins Owayo, Wilfred Koinange, Francis Cheruiyot and Kamlesh Pattni following a groundswell of public outcry.
“Many needless applications for adjournment were made and granted. The parties seemed to move in circles and at a snail’s pace speed. There was, in short, extreme lethargy in the prosecution of these cases,” the report noted.
In 1995, Wako moved to court to block opposition chief Raila Odinga’s own private prosecution of the late George Saitoti, Wilfred Koinange, Pattni, and Charles Mbindyo among others.
According to the report, ex-AG had moved swiftly to take over and terminate the private prosecutions so that he would be left with his own nine cases that he prosecuted the way he wanted.
Wako had argued the LSK was a busybody without any right to appear in court to prosecute the Goldenberg scam. The submission was upheld by the court and the private prosecution was dismissed.
“The common denominator in all these cases is that none of them was ever concluded from 1994 when they were instituted to 2003 when this Commission was formed thereby leading to the termination of the cases,” the report said.
The report which was released in 2005 by the Justice Samuel Bosire-chaired commission, concluded that in all the cases, there was a “reluctance on the part of both the Attorney General’s officers and counsels for the accused persons to proceed.”
The Constitution repealed in 2010 gave the AG’s office sweeping powers and authority to direct the police to commence investigations on virtually anything.
While the Goldenberg affair had been the subject of the proceedings of the Public Accounts Committee, with records available in various government offices, there was no effort by the AG to order for investigations, the report said.
A report by international consultants commissioned by the government to investigate the Anglo leasing scandal blamed Wako for Sh56 billion paid to suspect companies.
According to the report, Wako failed to provide sufficient support to lawyers contracted by the government to fight claims for payment by what the experts describe as sham companies that supplied overpriced goods.
On one instance, Wako had advised a law firm representing the Kenyan government not to cite corruption as a basis for the dismissal of a claim, advice which the consultants say contributed to the defeat of the government in the case.
The deals examined related to security-related contracts entered into by the government between 2002 and 2003 but arranged through the Turn-Key method of financing used to facilitate the controversial Anglo Leasing deal.
Under this arrangement, companies offer to finance the payment for goods upfront while the Kenyan government issues promissory notes undertaking to pay the company supplying the goods over a certain period.
Upon the revelation of the scandal, the government later terminated the contracts but companies sued demanding billions in payments.
Wako’s office was expected to fight off claims by the companies which sued the government in international courts for payment.
But according to the report that was commissioned by the Ministry of Finance in April 2008, the AG’s office failed to support efforts to fight these cases.
Wako’s failure to adequately pursue repayment of money paid to bogus companies indicated that his office had failed taxpayers.
Reports by the Auditor General and the Parliamentary Public Accounts Committee also indicted Wako.
Ethics and Anti-Corruption Commission chairman Eliud Wabukala has said the move by the US to bar corrupt elements, families and their associates from traveling aboard was welcome.

Wabukala said Kenyans should prepare for far-reaching travel sanctions against high-ranking individuals accused of corruption, as the international community steps forward to support Kenya’s war on graft.
“This (Wako’s US travel ban) is an outcome of our strong collaboration with other agencies and foreign missions. We are likely to hear more going forward,” Wabukala said.
Speaking when he presided over the launch of EACC’s National Ethics and Corruption Survey, Wabukala said the commission continues to partner with other countries in the fight against corruption.
“Some of the partners we are working together with have come to our offices and shared with us. What we are seeing is a product of these engagements,” he said.
Wabukala, however, did not reveal details of the nature of people likely to suffer from more travel sanctions by Western countries as the country heightens the war on corruption.
This was EACC’s strongest signal to graft lords that it would partner with other foreign countries to make sure that they are banned from traveling abroad as part of the efforts to tackle corruption.
The anti-graft agency has intensified the war on graft and has lately hounded to court senior government officials among them cabinet secretaries, principal secretaries, and CEOs of state agencies.
Article Source: The Star