During her birthday this year, Diamond surprised his baby mama and mum by gifting them with a brand-new Toyotas during their GreatGatsby themed party.

Fans have not seen Tanasha’s car since the bash and this has led to speculation that the car was just for display but not an actual gift.

Her critics claimed that Tanasha often flaunts presents she has received from Diamond such as her Fila shoes and iPhone but the car was missing in action. In addition, Tanasha would flaunt her blue BMW constantly on social media when driving to work or events but the lavish Toyota has not been displayed since it was bought. 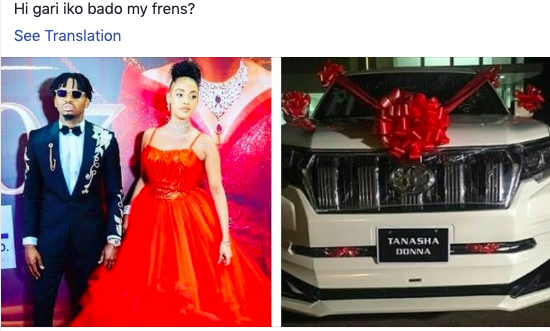 Here are some comments from fans:

Being Terry Sande: YES SHE HAS IT💖 SHE IS NOT LIKE NYANYALAO WA SHOW ZA MAGARI YA MAITI🚮🚮🚮🚮🚮