Former AFC Leopards head coach Luc Eymael has congratulated Harambee Stars for the hard-fought one-all draw against Egypt on Thursday night in Alexandria and went on to slam Egypt for their poor style of play.

Michael Olunga’s second-half strike canceled out a Mahmoud Kahraba opener for the hosts at the Borg El Arab Stadium to ensure that Kenya picked a vital point away from home as the race for 2021 African Cup of nations slots begin.

The record AFCON champions were far from impressive in the match that they missed their star man Mohammed Salah who is sidelined through injury. Kenya showed some good football in the clash and was particularly dominant in midfield and in the end, were rewarded with a point. 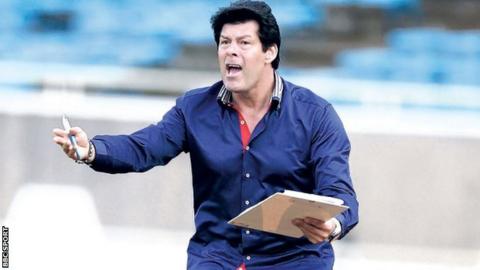 Egypt’s performance was heavily criticized by their fans and fans across the continent. The Pharaohs struggled to string passes and were more awful in the final third as a fearful Kenyan side, coached by Francis Kimanzi put in a spirited display in Alexandria.

Among those who noted the poor display from the Pharaohs is Belgian tactician Luc Eymael. The Black Leopards has coached in Kenya and the Egyptian league as well and has pointed out that the team didn’t have a pattern of play and was also much disorganized. He went on to congratulate Kenya for managing to pick a point away from home.

“Very poor Egypt tonight …nothing no patterns of play …no good organization….very poor …but congratulations to Kenya, they played very well today,” the tactician stated.