A man has angered people after revealing that he is creeped out by his girlfriend’s extra finger.

He disclosed that he met the girl through TikTok, a popular social media platform and he was so taken with her beauty but he later came to notice her extra finger and it creeps him out.

So, he is seeking out advice on how to deal with his love’s extra limb.

“Met her thru TikTok; saw loads of videos but never noticed that something was wrong until we met up. Baddie has an extra baby finger and it scares the shit out of me. She even put a nail and ring on it, I love everything about her but THAT FKING FINGER. Advice,” he asked on the SixBrownChicks platform. 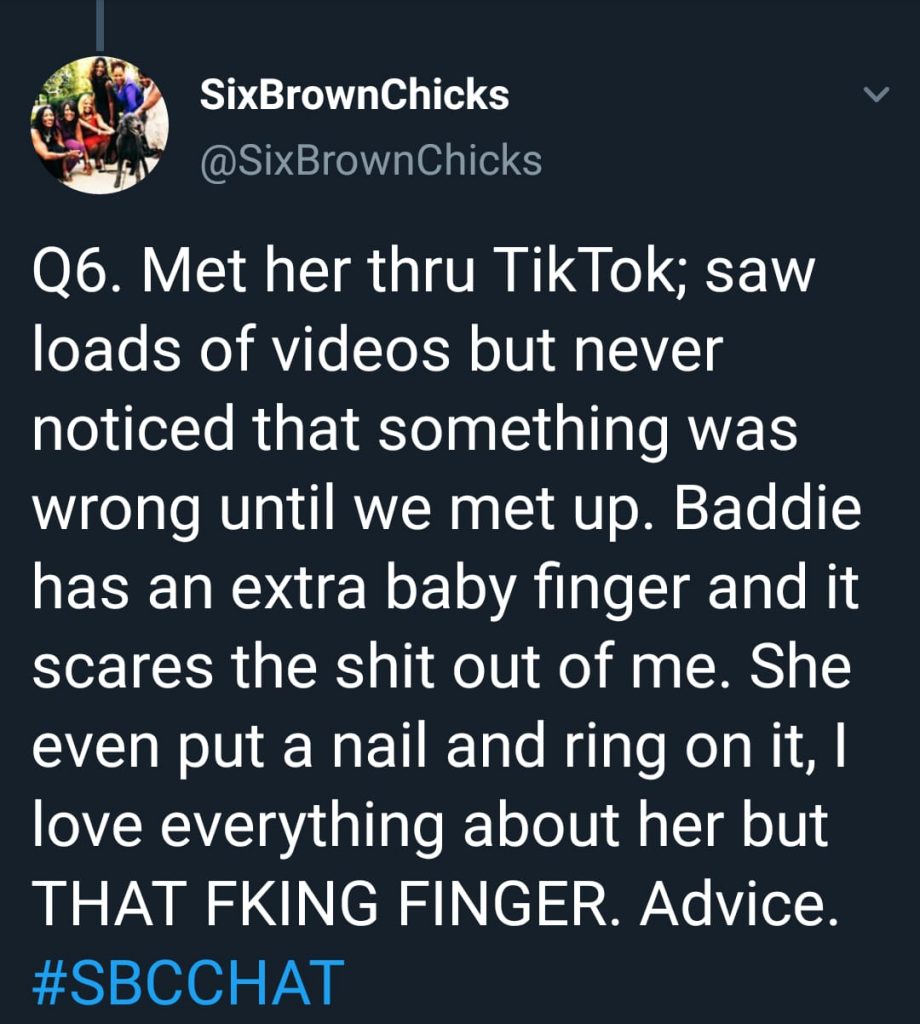 Some fans were offended by his shallowness while others felt that since the woman has accepted the finger, he should accept it too. Or better yet, he should break up with her leaving space for a man who will accept her as she is.

@I_Dont_Crack: She obviously isn’t ashamed of it and embraces it. If you can’t, she’s not for you.

@mrzsmiller: Sis has accepted her extra finger. If you don’t like it, move on. Don’t waste her time.

@DrkNemesis: That seems like a minor thing. If you can’t handle it, break up. Stop being childish
Tr3💫

@sayitsTr3s: She has an extra finger… if you love her; you have to love all of her and her extra unit… it cant be that bad! Sorry To This 👽

@YoVinks: A6. You dont have to date her🙄

@genewoods717: I mean…maybe the finger has a unique set of talents. Enjoy this opportunity for discovery!

@cherry_LA: FYI she’s not chopping her finger off for you so break up and find someone else. Am sure she’ll catch a better man who will LOVE HER AS SHE IS. #SBCCHAT #BabyGirl #BabyFinger #ASIS #BetterLuckNextTime

@Not_a_Downer: I’ve actually experienced something similar years ago so I understand BUT it’s something you either accept or move on. It looks like she’s accepted it probably after years of bullying/struggling. It’s superficial so you can get past but if not, don’t waste her time

@twistedfiction4: She’s accepted it and is fine with it, either you do the same or take your leave. And how exactly does sliding into TikTok dms work?

@jaiden_mcadoo: Stop your complaining and enjoy that extra digit 🤣

@_kingwhit: You can’t pick and choose what you love about people. Either love all of her or leave her so she can find someone who will.

@JonesAl5693: Polydactyly is the condition she has. I think it has a genetic component but its harmless. Sometimes it’s removed at birth. Read up on it, there’s nothing to fear. Your concern is baseless and built around the “look” of it.