Father of a Kenyan man believed to have fallen from a Kenya Airways (KQ) plane as it landed in London, on June 30, has denied a Sky News report indicating that the stowaway was his son.

According to the father who spoke to KTN News, his son is not dead though he is unsure of his whereabouts.

Also, the father dismissed the name Paul Manyasi which Sky News indicated as that of his son saying the images used are correct but his boy’s name is Cetrick Shivanji Isaac.

He says he informed the Sky News journalist that the man being imposed as his son was not the one and could not understand why the reporter went ahead to broadcast the report despite his denial.

Following the developments, the father on Wednesday threatened to take legal action against the reporter over the matter.

My son is alive. Father of the alleged stowaway says his son is alive and he is not the man that fell from a plane in London@CzedaBrenda @WillyLusige #KTNNewsCentre https://t.co/oDiC6wLzoC pic.twitter.com/PXJo4GpJL2

However, the man is the same as that interviewed by the Sky News report where he admitted knowledge of the son and some of the belongings recovered from the plane.

The father’s remarks raise eyebrows since the last time he spoke to the son, as he claims, was in July 2017.

The two have never met since then but the father remains certain that the son is still alive.

Further to that, the father claimed that a friend to his son informed him that the 29-year-old was arrested and was being held at Industrial Area Prison.

Though Sky News investigations indicate that the stowaway worked as a worker at JKIA and an employee of Colnet Cleaning Services, the reported employer has denied having ever had a staff with such a name.

In a statement that was released on Tuesday, the cleaning company dismissed the reporting as erroneous.

“We are unsure to the objective of the report….the company has provided all its list of employees’ records and information to investigating authorities which confirm that there is no employee by the name Pual Manyasi,” said Colnet in a statement. 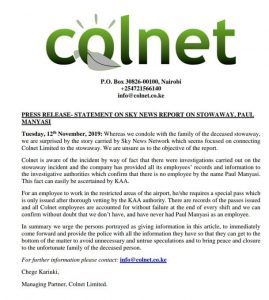 An investigative piece by the media house brought to the fore a series of interviews carried out by said station’s journalist including Manyasi’s alleged girlfriend and his friend whom they lived together at Mukuru kwa Njenga slum.

The investigative piece also reveals that a bag obtained by security officers in London, which reportedly belonged to the stowaway, was positively identified by Manyasi’s girlfriend as his.

Here is the Investigative piece by Sky News: