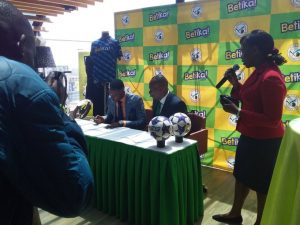 This will be the second deal that Betika has struck in Kenyan football world.

The company is the official sponsor for the Kenya Premier League side and 2009 Champions Sofapaka.

The new Betika deal will see the company offer KSh30 million a year for three years. The funds will be split into two, half will go into the clubs while the other half will g into the Football Kenya Federation (FKF) Secretariat.

Each National Super League team will receive 750 thousand shillings a year to be paid in two batches. In addition to this, Betika will provide ten quality match balls at the beginning and middle of the season. FKF President, Mr Nick Mwendwa, lauded Betika for coming on board at a crucial time by saying, “Today we mark yet another milestone by launching a partnership for our NSL Clubs which we believe will go a long way towards not only easing the clubs’ financial obligations but also increasing the competition in the league.”

The National Superleague consists of 21 teams. The first two teams and the end of the season are automatically promoted into the Kenyan Premier League while the third-placed team plays a two-legged tie with the third from bottom team in the top flight. The winner of the tie earns promotion.

Nairobi City Stars are the current leaders with 35 points from 13 matches followed by Nairobi Stima with 29 points.