Even as the Jubilee and ODM parties continue to trade accusations on each other over Kibra by-election chaos,  Deputy President William Ruto has faulted Raila, saying he has failed in his commitment to the handshake. 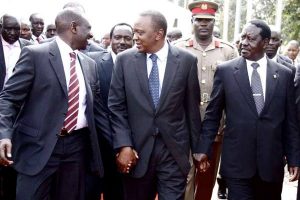 While draging President Uhuru’s name into the fracas, Ruto wondered why Raila, (Uhuru’s handshake partner) was still advocating for violence when he (Ruto) and Uhuru had decided that they will not allow any form of pre and post elections violence.

Ruto insisted that Raila must bring to an end his militia and retrogressive way of doing politics as one way of showing committment to the handshake he got into with Uhuru in March 2018. 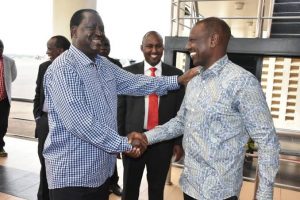 “President Kenyatta and I decided that PEV that had become synonymous with elections since 1992 must come to an end and it did. Tinga must bring ODM’s primitive and retrogresive signature culture of violence/chaos to an END and disband baba’s militia to show their commitment to handshake,” posted Ruto on twitter.

Ruto’s bitter reactions were triggered by Thursday’s attacks on his brigade by alleged ODM goons in Kibra.

The team, which included Kimilili MP Didmus Barasa, his Kapseret counterpart Oscar Sudi, together with former Kakamega Senator Boni Khalwale were pelted with stones and chased away while overseeing the by-election.

Ruto’s attacks come barely a day after he also demanded that Raila Odinga publicly apologise to all those who were attacked.

Taking to social media on Saturday, the DP accused ODM of being behind the violence witnessed on Thursday and asked Raila to come out and apologise to all those who were attacked.

“As Kenyans we demand that Tinga/his party unconditionally, unequivocally and publicly renounce the culture of violence, chaos, terror and gangsterism their signature modus operandi as witnessed in Kibra and unreservedly apologise to victims past and present for their hurt and loss,” Ruto tweeted.

But in a quick rejoinder, ODM Communications Director Philip Etale told off Ruto saying he should first apologise to the families and relatives of the victims of Kiambaa church tragedy which the DP was largely mentioned.

“DP Ruto, on demanding for APOLOGY from the ODM party leadership, I want to remind you that the families and relatives of the victims of the Kiambaa tragedy in Eldoret are still waiting for a public apology from you. Their hearts will only relax after receiving that apology,” tweeted Etale.