Photos of former Kakamega Senator Boni Khalwale holding stones in Kibra, on Thursday, is now a rocking ‘movie’ on social media with a section of online users yet to get over it.

In what he could term self defence, Khalwale was captured ready for war with a section of kibra residents after being caught between a rock and a hard place.

A rowdy crowd was baying for his blood in order to eject him from the area and at one point, he had to engage in a ‘do me i do you’ with one man who kept coming at him.

After a day of trending on social media, how better can Kenyans mark the moment than doing what they do best, starting challenges and this time, #KhalwaleChallenge was born. 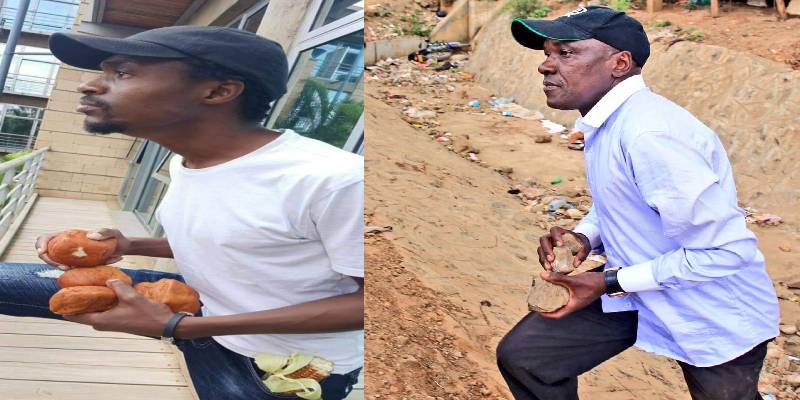 Members of the KOT fraternity took photos in similar poses like those of Khalwale, basically making fun of the whole situation.

Well, nothing comical gets out of Kenyans hands without a section of them bracing themselves for it.

The drama depicted in Khalwale’s thrilling ‘movie’ culminated into a series of entertaining photos with Kenyans seemingly flexing their creativity muscles.

With creativity coupled with a hilarious touch, many have tweeted a series of photos of them trying to fit into the shoes of the former senator.

In another picture, the Khalwale is seen standing upright holding a number of stones.

The former senator, reportedly despite his security team’s intervention, picked a fight with a man yet to be identified as they engaged in a stone-throwing ‘contest’.

The results of the ordeal turned the former senator into the face of the Kibra poll with various newspapers using the image of his drama as their cover page while reporting on the by-election.

This is not the first challenge Kenyans have engaged in with the online fraternity taking every possible moment to make fun of different situations.

One of the notable challenges that once took the nation by storm includes that of Jimi Wanjingi and his wife.

The picture of Wanjigi addressing the media, his wife holding him tight and Bungoma Senator Moses Wetangula standing beside them went viral on social media provoking massive reactions.

Another notable one was that involving Starehe MP, Charles Njagua, who Kenyans accused of taking photos in one of the notable buildings in Westlands, Nairobi, but claimed he was in Dodoma, Tanzania.