Mombasa Governor Hassan Joho has been conspicuously missing from the political scene, especially in the days leading to the Kibra MP by-election.

The flamboyant County Head broke the Internet Friday, after it emerged that he had been hospitalised for close to a week, with a malaria infection.

According to his Communications team, Joho had already spent five days in hospital as of Friday, as he received treatment.

While a majority of Kenyans were quick to mock the  self-declared Sultan for being grounded by an illness as insignificant as Malaria, a section of observant social media users were quicker to hail Joho, for actually seeking medical assistance locally.

This is contrary to the common practice among affluent individuals in the country, especially Parliamentarians and Governors, of flying out to European and Asian countries for treatment, despite the local scene being dotted with hundreds of health facilities.

While leaders are free to seek treatment wherever they wish, Kenyans’ bone of contention is the fact that these leaders have run down hospitals under their management, and knowing how deplorable and under-equipped these facilities are, they do not think twice about visiting luxurious and well funded institutions outside the country.

Joho’s move to get treated locally, therefore, has been viewed as an extremely humble gesture on his part, and a demonstration of his faith in the ability of medical facilities in his County to deliver adequate treatment.

Nevertheless, 001 received some amount of backlash for getting admitted at a private hospital while the Coast General Hospital, among other public hospitals, are at his service as well.

Other Kenyans on social media could not resist teasing the flashy governor, arguing that a man of his stature should only suffer serious ailments. 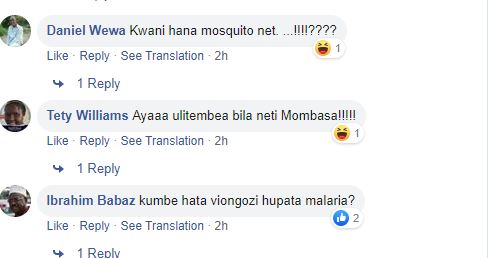 A section of hilarious citizens also termed Joho’s illness as a result of fear, that authorities might be narrowing down on him, for what they alleged to be the Governor’s involvement in drug trafficking syndicates.

Former Nigeria President Olusegun Ombasajo, who has also in the past been implicated in drug trafficking scandals, calling on the County Head in hospital only made matters worse, with some citizens speculating the visit to be a drug-peddlers’ forum.