With only some hours remaining before voting activities comes to an end in Kibra, candidates and political parties are busy crisscrossing the constituency to ensure that all goes according to plans.

Deputy President William Ruto, who is rooting for Jubilee candidate in Kibra, Macdonald Mariga, has already sent out a message of hope amid rising voter bribery claims in the constituency.

Ruto expressed hope that the results would change the leadership of Kibra, at the same time accusing his opponents of attempting to intimidate voters through violence.

The second in command assured the residents that police officers were in high alert to avert any kind of violence during and after the voting process.

The people of kibra have turned up in numbers to vote for their MP resisting the violence narrative by our opponents. Peaceful voting is going on in many polling centres and Security officers are on alert to deal with acts of lawlessness. Change is imminent! Mungu mbele

Even as Ruto continues holding on to hopes that his candidate will emerge with victorious, ODM brigade led by the party leader Raila Odinga is also on high alert to make sure that any attempts to bribe and steal votes are dealt with.

Speaking after casting his vote at Old Kibera primary school, Raila condemned voter bribery claims that had been reported in some of the polling stations saying the people of Kibra were vigil and ready o protect their vote.

He urged the voters to protect what he termed as ‘their bedroom’ from any invasion from the ‘outsiders’.

“I urge those who have not voted to come out from their residences and vote today. We are in our bedroom and I want to urge our people to protect our bedroom against infiltration and outsiders,” remarked Raila. 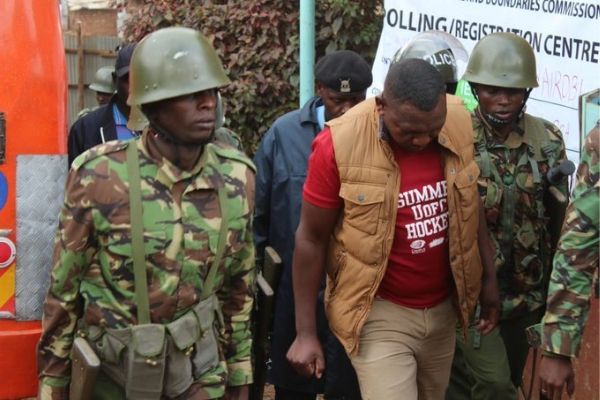 While laying blame on the laxity of security officers in the constituency, Junet said they had forwarded all the claims of voter bribery incidences to police and IEBC for legal actions.

“DP Ruto’s main strategy in Kibra was bribery and vote-buying on Election Day today. He believed, quite unfortunately, that he will have people to bribe. He forgot, at a huge risk to himself, that Kibra is the last line of defence,” stated Junet.

On Thursday morning, two people, a man, and a woman were arrested separately at YMCA polling station and Old Kibra Primary school after reports emerged that they were bribing voters.

In the video that surfaced online, the residents are reported to have attempted to lynch the man before the police came to his rescue.

Commotion arose after claims that an individual attempted to bribe voters. Angry residents wanted to lynch him but the police saved him and is under custody. #DayBreak#KibraVotes pic.twitter.com/4v3xWerfRN

Nairobi police boss Philip Ndolo confirmed the incidence saying his officers had arrested the two in connection to bribery claims raised by residents.