Kenya Airways on Wednesday responded with answers as to why a plane that was headed to Nairobi from Johannesburg turned back in what was alleged to be a stowaway incident.

The airline dismissed articles that ran the story regarding them as, “articles that carried a great deal of  sensational misinformation with a dismal level of fact-checking.”

Kenya Airways insisted that the insinuations were false and went ahead to shed a light on the activities that led to the aeroplane turning back to Johannesburg.

“We confirm that the flight took off from O.R Tambo International Airport as scheduled but was notified to make a return back to O.R Tambo shortly after takeoff,” the press statement read in part.

@KenyaAirways reason for the turn around on KQ761 on FL31K? pic.twitter.com/8UYWaDVxRD

The reason for doing so according to KQ was to off-board one of their engineers travelling as a passenger and was needed in Johannesburg to carry out official duties.

The airline further insisted that it was responsible for carrying out routine maintenance check-up on all its aircraft that fly in and out of O.R Tambo with KQ engineers.

In July of this year, a dead stowaway was discovered to have been on a Kenya Airways plane that was headed to London from Nairobi.

The body of the unidentified male dropped from the plane into a garden in Clapham, South London.

It is believed that he died inside the landing compartment where he had hidden.

“UK police also discovered a bag containing food and some clothing at the rear left landing gear of the plane,” the Kenya Airports Authority later revealed. 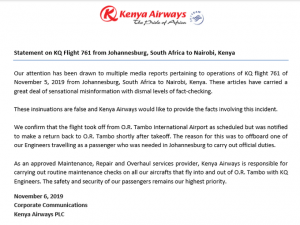