Three days after the campaign rally of Amani National Congress party leader Musalia Mudavadi was disrupted by rowdy youths in Kibra, IEBC has summoned four of major parties in the constituency.

While giving the direction, the RO remarked that the four parties are accused of diverting from their approved campaign schedules causing chaos among supporters.

“Following the complaints filed by the ANC and Ford Kenya parties about violence witnessed across some parts of Kibra constituency over the weekend, we have summoned all the four parties that were involved.

This is because there was a slight diversion in their campaign schedule,” stated Muli during a briefing on the preparations of the mini-poll.

The violence was reported as the three party leaders; Raila Odinga (ODM), Musalia Mudavadi (ANC) and Moses Wetang’ula (Ford Kenya) transversed the constituency to drum up support for their respective candidates on October 27, 2019.

Mr. Mudavadi’s rally, which was being held at Kamukunji grounds was cut short after rowdy youths started pelting stones at his vehicles.

The police were forced to use tear gas and fire live bullets to disperse the youth who were tempting Mudavadi’s supporters trying to attract a fight.

Mr. Butichi of Ford Kenya had to leave Bukhungu grounds, where he was campaigning shortly after the ODM politicians who were sneaking through the area made a stop.

The fracas started after the Ford Kenya youth who were trying to resist their ODM counterparts were wrapped up and chased away in a fight that lasted for three minutes. One person was injured in the process. 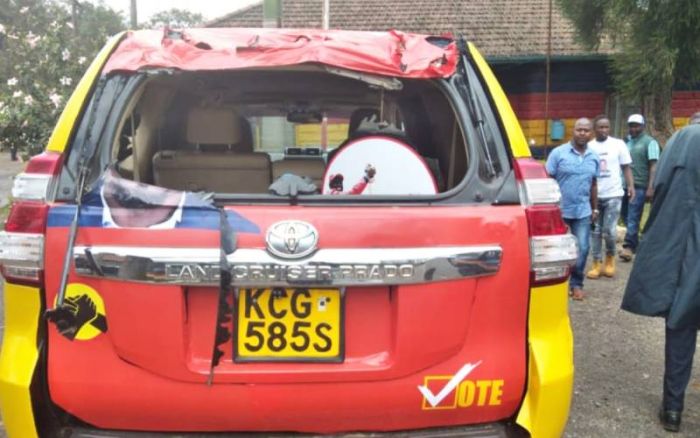 Mariga was left counting his losses after rowdy youths attacked his convoy, pelting it with stones and burning tyres.

The irate youth seized the Toyota Prado branded with Mariga’s portrait and went ahead to set its tyres ablaze next to a billboard bearing Mariga’s image. after they allegedly got one of Mariga’s supporters with sh10million bribing voters in the constituency.