A family in Mwea village, Gatundu North constituency in Kiambu county was on Tuesday thrown into jubilation after their father who had disappeared from home 35 years ago made a surprise return.

Upon his arrival, Mr. Lawrence Njuguna, 80, got a marvelous reception reminding those who had trooped his home to receive him of a biblical prodigal son.

Njuguna narrated how he left his home in 1986 for Kajiado where he ventured into charcoal business for 20 years before crossing over to the neighbouring country of Tanzania.

“Since I left my home, I lost crucial communication with my family… and up to now, I have never owned a mobile phone,” stated the already aging Njuguna.

The family of Mr. Njuguna played host to the whole of Mwea village which had trooped the home to confirm if indeed the old man was their lost son whom they had waited for many years.

While in Tanzania, the old man narrated how he spend his 10 years engaging in the sand selling business which he said was not making good profits. 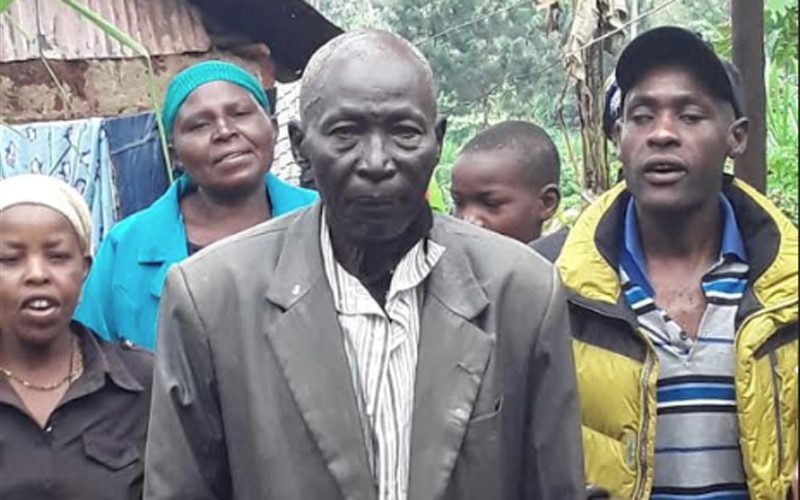 His wife Mary Nyathira Njuguna expressed immense joy as she welcomed back her husband whom she said had been forgotten by many in the village.

“I don’t have any problem with my husband. I welcome him home so that we can be together as a family. We had looked for him everywhere with no success,” stated Nyathira.

Njuguna was happy to find a family of four children and a number of grandchildren welcoming him back home after being out for a long time.

“I am happy to meet my grandchildren after being out for such a long period of time. God is really great,” added Njuguna.

His elder son Mr. Samuel Irungu was full of joy after meeting his father who left home while he was only two years old.

“As a family, we can confirm that God has a miracle in our family. We have for a long time been trying to trace our father in vain but today, we are happy he is here with us again,” remarked Irungu.

Mr. Njuguna’s surprise return after so many years remained a topic of discussion for the better part of the day in Mwea village and beyond.