Police are investigating a case whereby a man set fire to his son’s fingers days to when the Kenya Certificate of Primary Education(KCPE) exams are slated to commence.

It is alleged that the man acted out of anger after his son lost a mobile phone.

The victim was a candidate at Kakola in Nyando, Kisumu County and his future remains uncertain as he does not know how he will sit for the national examinations set to take place on Monday next week.

The father; who is the main suspect in the case, was immediately arrested by the police for further questioning. 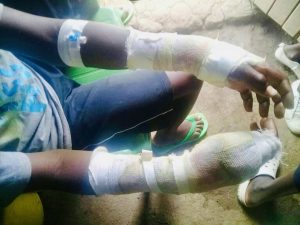 He is set to be arraigned in a Kisumu court on Friday.

Two days ago another KCPE candidate was killed by her guardian for allegedly returning home late at around 2 a.m.

The 17-year -old girl, who was set to sit this year’s KCPE exam at Tagare Primary School, is reported to have arrived home at around 2 am on Monday from an unknown location, angering her guardian, 30-year-old Linet Biyaki.

Biyaki is said to have beaten up the girl with a stick, inflicting serious injuries on her.

Confirming the incident, Suna East Sub-county Police Commander Mark Wanjala said the girl was pronounced dead on arrival at Samjomen Hospital where she was rushed by neighbours.

The woman was arrested and detained at Kehancha Police Station.

In the neighbouring county, two male students of Mawego Technical Training Institute in Homa Bay County were arrested for eloping with a female KCPE candidate.

Orinda acting on a tip-off from the members of the public, found the girl had hidden in a rental house at Lida Market in the area with the minor undertaking responsibilities of a wife.