Diamond’s alleged side chic, Viva Fabrica is back on social media claiming to have met with him.

The Kenyan beauty based in Germany claims that her ‘bae ‘, Chibu Dangote praised her on her looks and after calling her pretty he added that there was nowhere she struck a resemblance with Tanasha. This is after a fan saying that she looked like Mama Simba, Tanasha.

“Met her man and he said that we both pretty and we both look nothing alike ..it’s all in your heads, she got big lips, I got big lips and BOOOOM! We now look- alike.”

This is not the first time however that she is being involved in Diamonds life. She first made headlines after coming out to flaunt the yellow snake featured on Fally Ipupa and Diamond Platnumz Inama video. 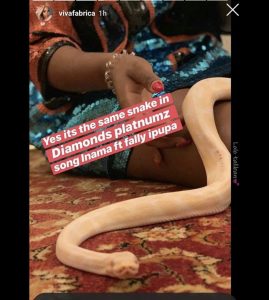 In a question and answer session on Instagram, she told her followers that Diamond has always been her crash and they, therefore, went on to link her to Diamond Platnumz as the latest side chick something that saw her rise to fame with no struggles!

After gaining the fame, Viva came out bashing celebrities busy flaunting fake butt implants a few months ago, before tables turned on her, to be top of the list.

In a Q&A session with fans, she refuted claims that she has had cosmetic surgery on her b**ty because as much as she can recall, she is half Luo and half Arab, she is just blessed!

She also had a confrontation with Diamond’s ex, Zari Hassan after fans claimed Zari was jealous of her and was even copying her looks.