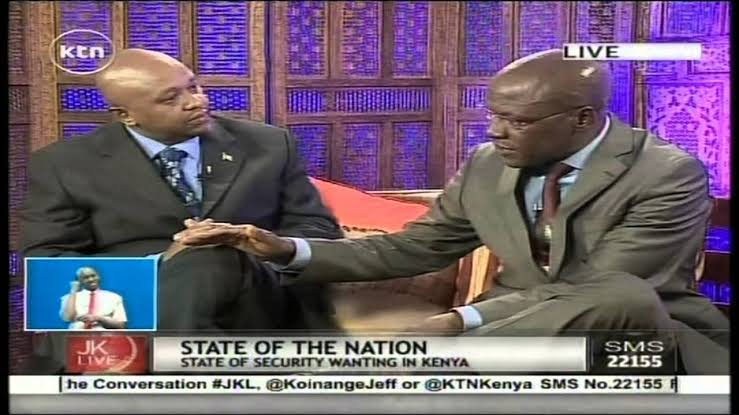 Do not bite the hand that feeds you is the hard lesson vocal political aspirant Boni Khalwale has learnt after tackling KTN Point Blank host Tony Gichoka who was recently arrested for being drunkard disorderly.

Fresh in mourning of late wife Adelaine Khalwale who succumbed to cancer the western bull Khalwale returned from conducting a ritual ceremony in the mood for checking up on political opponents.

He ended up listing a number of demises and controversies the likes of powerful Odinga family and top journalist have been through in his absence.

The mention of Gachoka’s arrest did not rest well with host who has since clapped back by informing the former Kakamega senator Khalwale that  his name in Luhya means a “sick person“.

Boni was further reminded that the he has previously admitted on live television receiving sh 70, 000 from Gachoka for his re-election thus should be more mannerly while gloating the Deputy President William Ruto’s handouts.

@BelAkinyii this man Bonny Khalwale @KBonimtetezi name in Luhya means a sick person. As he admitted to @KoinangeJeff on JKL when I wrestled him there, I gave him a paltry 70,000/- for his re-election campaign so he should have manners while gloating DP Ruto handouts. Bure Kabisa! pic.twitter.com/DhaKYOpYLm

Recently Gachoka who was set to board a Silverstone Air flight to Nairobi was unfortunately arrested at Diani Airstrip in Kwale County for causing disturbance after he was barred from boarding a plane with alcoholic drinks.

He reportedly became rowdy as he demanded to board the flight while carrying alcoholic drinks in hand and some in his bag, contrary to the airline’s rules and regulations.

He has defended himself saying he is on holiday and all Airports are guilty of serving drinks to customers in Kenya!

@KBonimtetezi I was expecting that to earn your pay you must comment and nothing you say can remove the smile from my face. Ati now watu wa DP @kipmurkomen can spend all day saying how TG is enjoying his life in Diani. Which Airport does not serve a drink in Kenya? Am on holiday! https://t.co/lp5WivpT1n

Boni on Saturday, October 19, performed the final ritual following the burial of his first wife, Adelaide Khalwale. On his social media pages he has since posted a video of villagers singing and dancing as they escorted a charged up bull for a planned match.

This morning we brought the cultural mourning of Mama Adelaide to a closure with our bull Malinya winning two matches in her honour… pic.twitter.com/J4gd8tWoHT

Politics has recently been blow for blow with leaders revealing their ugly sides in bitter online exchanges. Do you think these personal fights should be handled publicly?