A resident of Ganda Ward, Kilifi County has given his account of the events surrounding the death of Mr. Gumbao Jola, the man who was shot dead following a fracas that was allegedly caused by Aisha Jumwa during an ODM Agents meeting.

According to the resident, Aisha Jumwa stormed an ODM meeting at Mr. Reuben Katana’s (ODM Candidate) residence and took issue with a number of officers who she had allegedly sent on a mission.

“I sent you on a mission, why are you still dilly dallying? Let me handle my issues in my own way,” Aisha Jumwa told officers present at the scene. This is according to the resident whose Video Clip is doing rounds on the interwebs.

Aisha then demanded that she is shown ODM candidate Reuben Katana.

“Where is Reuben’s house? Who is Reuben ?” Asked an Angry Aisha Jumwa.

That was the cause of tension and chaos. Jumwa then snatched a Pistol from her bodyguard and upon being shown who Reuben was, she aimed a shot a the ODM candidate and it is at that point that the bullet landed on Mr. Gumbao Jola.

Mr. Gumbao was shot on the chest and was pronounced dead on arrival at the Malindi Sub County Hospital. 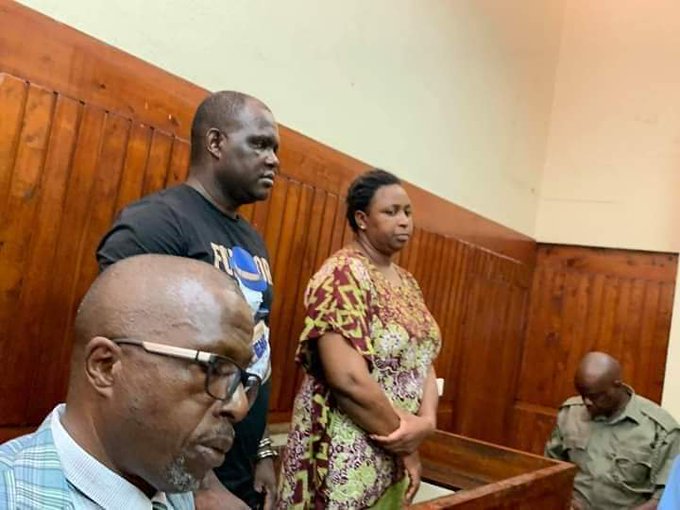 WATCH THE GANDA RESIDENT NARRATE HOW MR. JOLA WAS KILLED BELOW

Father to the deceased narrates How Aisha Jumwa stormed the meeting of ODM pic.twitter.com/5GBoBkt8Qi

Jumwa and her bodyguard, Okuto Otieno were arrested and presented to Court on Wednesday. The two appeared before Senior Resident Magistrate Vincent Adet who ordered that they be locked up for the night.

The two will be presented to Court on Thursday even as the Prosecution seek to have them detained for 21 days to give room for indepth investigations.

Currently, I have been arrested at my residence in Kakuyuni and am being taken to unknown destination with high guarded security officers.#WeStandWithAishaJumwa pic.twitter.com/jrApgg0zAI

The Magistrate will give a ruling on the same on Thursday.

Apart from Jumwa and her bodyguard, the police also arrested the MP’s Gradener and Domestic Worker.

Aisha Jumwa is out to ensure ODM is defeated in her own backyard having vowed to teach the Raila Odinga led Party a Political lesson.

Despite being in custody, the Vocal Malindi MP has vowed to not slow down anytime soon.

Aisha Jumwa is behind Abdul Omar Mohamed an Independent Candidate.