ODM Youth leaders have fired a warning shot to Malindi MP Aisha Jumwa just hours after the Vocal MP was arrested following the death of an ODM supporter.

On Tuesday saw Aisha Jumwa storm an Agents meeting at the residence of ODM candidate for the Ganda Ward by-elections Reuben Mwamure Katana. A scuffle ensued and in the middle of the chaos, an ODM agent who was identified as Mr. Gumbao Jola  was shot dead.

Jola was reportedly shot on the chest and was pronounced dead on arrival at the Malindi Sub County Hospital.

Following her arrest, Aisha Jumwa was detained at the Kilindini Police Station in Mombasa before being presented to Court on Wednesday.

Speaking from Ganda, Kilifi County, ODM youth leader from Nairobi County Brian Yobra said that the seat will go to ODM despite the dirty politics being played by Aisha Jumwa.

“We have come in peace to take the Ganda Ward Seat but if you feel like you can kill everyone to bag the seat, we are ready for you. As Long as we as ODM Youth leaders are still alive, the Ganda Ward Seat will go to ODM whether you like it or not,” Said Brian Yobra.

when Aisha Jumwa intimidates ODM followers by bullets and Chaos then She must also be ready to take the same bullets. These same people will come to her rallies more hardened and ready for the worst. the ground is being laid. @TheODMparty must secure the safety of its followers. pic.twitter.com/hg2T473eXo

The Ganda Ward by-elections are set to take place on Thursday, 17 October.

Ahead of the by-elections, IEBC has condemned the unfortunate incident that took place on Tuesday and sent heartfelt condolences to the family of Mr. Jola.

IEBC also summoned the candidates involved in the fracas to record statements.

“As Investigations are being carried out by the DCI, the commission has on it’s part summoned the two candidates involved namely Abdul Omar Mohamed (Independent Candidate) and Reuben Katana Mwamure (ODM) to record statements”, Said IEBC in an official statement seen by Opera News.

Aisha Jumwa is behind Abdul Omar Mohamed and has promised to teach ODM a lifetime political lesson in her backyard.

Other candidates are David Mitsanze of Kadu Asili party and Joseph Ngumbao Kiponda of the Jubilee Party. 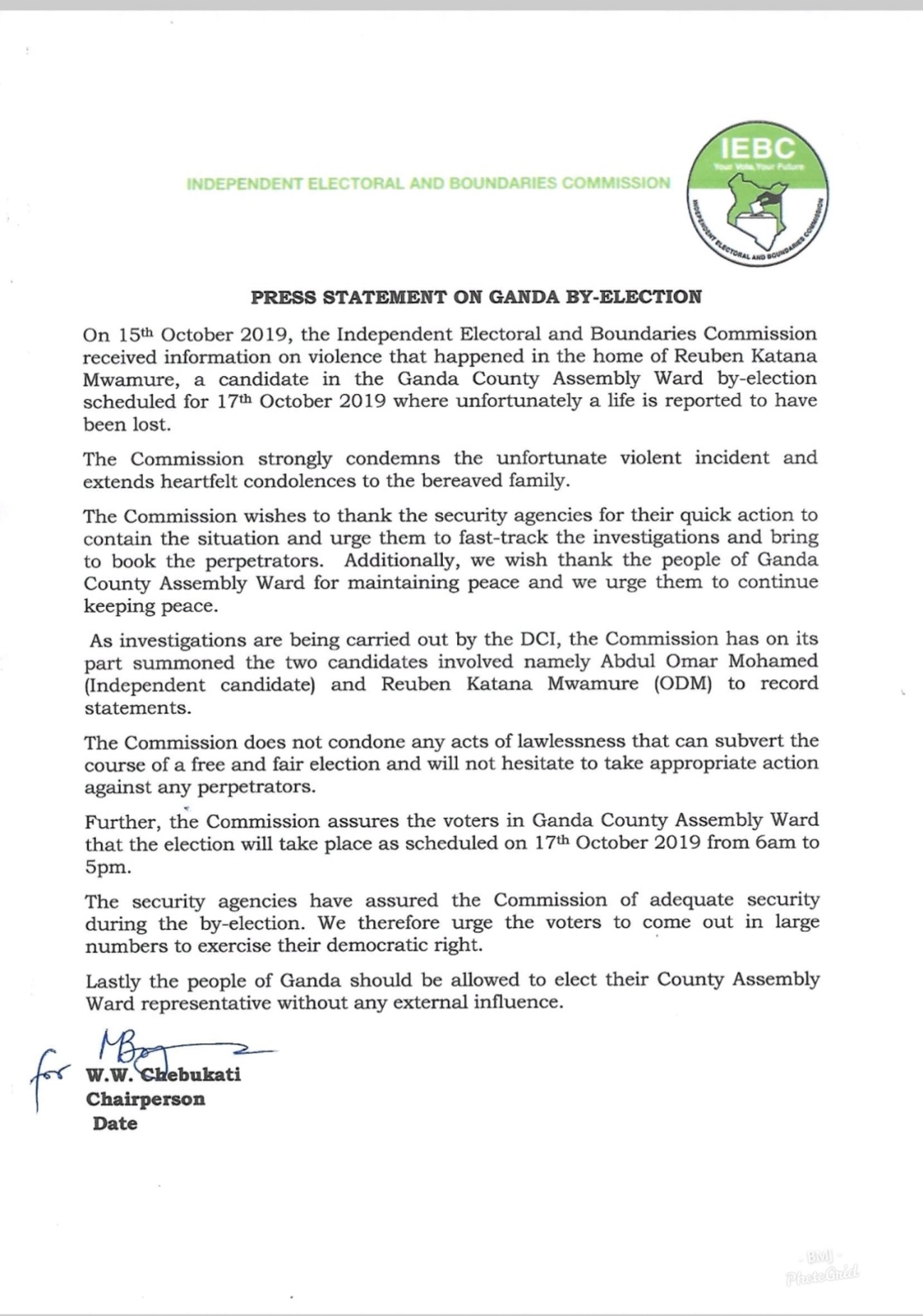