Even as  the nation join hands to celebrate the be forgotten Moi Day, many will remember the second president of the republic with his hilarious quotes and the famous drink ‘Maziwa ya Nyanyo’

Others will, however, remember the retired president for his stern way of dealing with critics who spoke ill of his government.

During the reign of former President Daniel Arap Moi, no one dared speak sense to power and if it happened, it was in hushed tones lest the walls heard.

But despite all the ruthlessness of his time when he walked Kenya like a colossus, there was not any Kenyan that could speak sense to power at a time when abuse of power was unfettered as did one ‘mad’ woman from Nyeri.

Moi was irked one February in 1992 when Prof Wangari Maathai, who had been released from police custody on bail, joined others in a hunger strike at Uhuru Park.

At the spot, today is known as the Freedom Corner Maathai, who won the Nobel Peace Prize in 2004, and the other women were pressuring the government to release political prisoners.

After just four days of hunger strike, on 3 March 1992, the brutality of the police was experienced when the protesters were forcibly removed. The target of the wrath was Maathai who sustained serious injuries alongside three others. 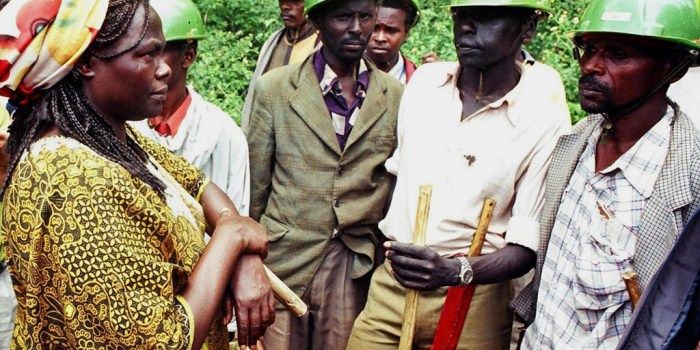 Following this altercation, Moi called her “a madwoman” who was “a threat to the order and security of the country”.

But this did not deter her from her march against oppression and the wanton plunder of the country’s natural resources.

In what seemed like a reenergized push for her cause, Maathai came out stronger after this attack.

Ironically, Maathai got to share the same room with her oppressor thousands of miles away in Rio de Janeiro at the UN Conference on Environment and Development (Earth Summit). While Moi’s government tried to discredit Maathai by tagging her as an inciter and a miscreant against the order of the country, she was chosen as the chief spokesperson at the summit.

The government wanted Maathai barred from speaking at the summit but it seems the tides were changing in favour of the future Nobel Laureate.

Despite the frustrations, Maathai’s star could only shine brighter.

With global media outlets focusing on her as the face of the struggle, there was no holding her back. Even Moi, with all the power, could not tame her in what became a battle of the titans.

While things seemed to cool down for a bit for the late Maathai, the Moi regime monstrosity rose again when the government sought to invade forests to reward party sympathisers with the land.

In 1998, the government-read Moi- was planning to privatize large swathes of public land in Karura Forest.

Moi wanted political supporters to get the land and Maathai could have none of this. While she was diplomatic in her protests by sending letters to government officers and speaking to it through the press the government was adamant.

With her Green Belt Movement, Maathai went to Karura Forest to plant trees and protest against the forest’s destruction.

While continuing with her tree-planting campaign, on January 8, 1999, she was denied entry into the forest by a large group of men. Maathai attracted a lot of attention wherever she went during the protests which also saw heavy contingents of the police deployed.

After the Karura incident, Kenyans started protesting in large numbers with students in Nairobi taking the lead.

The protests throughout Nairobi were sustained until August 16, 1999, when Moi bowed to pressure and announced the banning of all public land allocations.

In protest, Maathai was collecting petition signatures on March 7, 2001, in Wang’uru village near Mount Kenya when she was arrested. She was however released the following day after protests against the arrest broke out. She was released without being charged.

Again, Maathai was arrested on July 7, 2001, after planting trees at Freedom Corner in commemoration of Saba Saba Day. She was released later that evening.

With Moi having lost the popular vote against Maathai, the professor returned to teaching as the Dorothy McCluskey Visiting Fellow for Conservation at the Yale University’s School of Forestry and Environmental Studies.