Deputy President William Ruto has once again found himself at the center of poll controversy after ODM party officials claimed the DP was plotting on rigging the election in favour of Jubilee candidate Macdonald Mariga in Kibra.

According to insider reports, it is said the party on Wednesday told the Independent Electoral and Boundaries Commission, led by chairman Wafula Chebukati, of the existence of KIEMS kits at Ruto’s Karen residence.

The party officials revealed they are to verify registration details of Kibra voters who have so far been invited to the Ruto’s Karen residence.

Led by ODM chairman John Mbadi who met with the IEBC officers led by its chairman Chebukati for over three hours, the team presented details of what they said is a vote-rigging scheme being operated right from the DP’s official residence and involves top ICT officials at the commission.

A source who attended the meeting told a local newspaper, The Star, that the KIEMS kit issue at Ruto’s residence was at the centre of the three-hour deliberations. 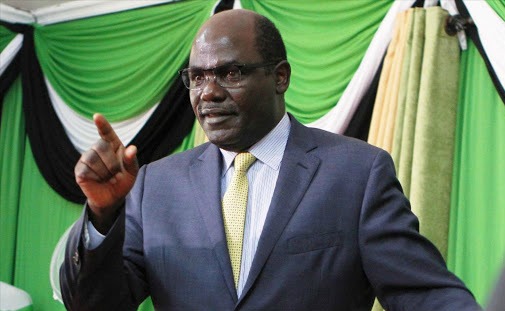 According to ODM, Kibra residents who are invited to Ruto’s Karen residence are made to surrender their national identity cards, which are then verified with the gadget to determine their registration status before they are engaged.

“Our concern was how comes at DP Ruto’s residence there is a KIEMS kit where those who go there are first told to surrender their IDs for verification if they are indeed registered voters before they are facilitated,” the source wondered.

“That shows that he [Ruto] is able to access the voter register. What else can he do with the register at his disposal?”

But the DP’s communications secretary David Mugonyi dismissed the claims, saying Jubilee does not need the kits to win the November 7 poll.

“We do not need the KIEMS kit to win Kibra. The people will decide. This is mediocrity redefined,” Mugonyi told the daily.

The Orange party also singled out two senior ICT officials at the commission whom they said are working in cahoot with a former Cabinet secretary to deliver victory to Mariga.

According to the source, the poll agency expressed surprise at the claim but promised to investigate the matter.

IEBC also assured the party that the commission will with immediate effect lock all KIEMs kits ahead of the by-election even as they get to the bottom of the matter.

“The commission has assigned an investigator to follow up on any malpractice in the upcoming Kibra by-election,” Chebukati stated after meeting with ODM officials on Wednesday at Anniversary towers.

Chebukati also announced they will be using the KIEMs only for the identification of voters, with the rest of the processes done manually.

All poll officials will be shared with political parties through the Registrar of Political Parties, he sought to assure voters and the parties involved.

The IEBC chief said there will be no transmissions of results from polling stations to the tallying centre.

“Kiems kits will be only for identification. Some polling stations might change due to school programme and voters will be updated in a good time. A comprehensive update will be made available on Friday next week,” Chebukati said.