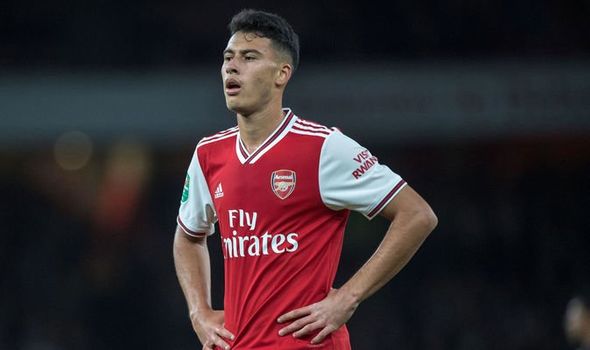 Arsenal beat Nottingham Forest 5-0 in the Carabao Cup on Tuesday night to advance to the last 16 stages in the tournament. The Gunners fielded a young team comprising of academy graduates and players who have not featured in the league so far this season.

There were some notable impressive performances from the Young Guns but none caught the eye more than young Brazil striker Gabriele Martinelli. The 18-year-old scored a fantastic brace including a thunderous shot from outside the box that flew into the top corner.

After the match, Arsenal defender Rob Holding who was making his return to the starting line up following a nine-month injury lay off hailed the youngster and revealed that he gives the defenders lots of work to do in training.

“He’s been a handful in training.

He’s a sharp lad and he’s a natural finisher. You saw that header, he’s a small lad and he got up there and won it. He’s impressive so hopefully he can continue with that.” pic.twitter.com/rHg39Edkqq

Arsenal is really spoiled with choices in forward positions. Here is Gabriel Martinelli second. He certainly knows how to hit them. #AFC pic.twitter.com/zfUTrc880N

Martinelli signed for Arsenal on the recommendation of Technical Director and club legend Edu Gaspar. He was brilliant in the club’s pre-season tour at the Emirates and scored a goal with his chest against Fiorentina.

It was a very positive night for Arsenal who also welcomed long term injured right-back Hector Bellerin while new signing Kieran Tierney also made his debut at left-back.