Our brothers and sisters from Western Kenya never cease to amaze us with their ridiculous ways of survival.

Here are some stories that left most of us in shock, to say the least.

When there was a wife Exchange deal

So, at what point does a man contemplate swapping his wife with another? The couple hailed from Shitirira village in Lurambi, Kakamega.

It all started when one woman left her husband with whom they have two children and moved in with another married man to apparently escape marital woes and they agreed to swipe wives.

Man Who Consumes 12Kg of Ugali

Edward Alukuma from Shinyalu, Kakamega County consumes ugali made from more than 12kg of maize flour in a day! The 38-year-old said that he views his ability to consume large quantities of ugali as a talent, pointing out that he sees s nothing extraordinary in it.

3 Men who mounted on Cow to death

Attendants at one of the Kakamega Law Courts were left in shock after three young men were accused of stealing the Sh30,000 cow, committing an unnatural act with it and killing it.

Shikuku, dressed in dirty, worn-out clothes and with unkempt hair, was found with Sh250,000 cash and a consignment of banned polythene bags. He was speaking to himself near Kimilili Katiba grounds where he normally sells plastic bags, seemingly oblivious of the ban.

A family in Butere was left in shock after the body of Martin Shikuku Alukoye had been employed in the newly-formed Kakamega County Youth Service when he fell into the river and drowned. The family told the county officials they had buried Alukoye in his work clothes. To their dismay, youth service officers were instructed to exhume the body and retrieve the uniform.

When a man tried raping his mother

On the morning of September 17, a Kakamega man was cutting down trees at their compound and ferrying the logs to an unknown destination when his mother picked some logs for her own use leading to an argument. It was said he pounced on her, removing her skirt saying he was ready to serve a jail term after having a sexual encounter with her.

Mr John Makokha, 78, allegedly killed his son Habil Amunza by slashing him with a panga. This incident happened August 18, 2019, on in Eshirembe village, Kakamega County for allegedly stealing and selling family maize.

Victor Omulai confessed he really loved the hen and wanted to give it a decent sendoff – He disclosed the bird succumbed to injuries after being beaten by one the residents in the village – The disgruntled man sang dirges, read a bible verse and prayed before burying the hen. He promised to conduct annual anniversary in remembrance of his beloved hen

In 2016 Mr Wanjala, a casual labourer, was seen hanging on the helicopter as it flew away from the grounds, prompting desperate mourners to shout and wave at the pilot to land the aircraft and save him.

A couple in Bungoma exchanged blows after the wife allegedly sold their only cow to get facilitation to attend the Churchill show. Esther Nanjala, a staunch fan of Churchill show, secretly sold the animal without the husband’s knowledge, according to the neighbours.

A study was conducted in  March 2019 that showed people in Western Kenya had higher rates of throat or food pipe cancer.

They prefered their tea at temperatures exceeding 72°C, the highest recorded so far. 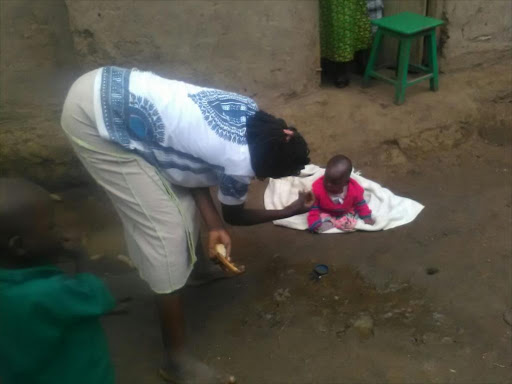 In normal circumstances, babies sometimes say their first words at nine months of age. A talking three-month-old baby sent shock waves through Bilaa B village in Tongaren constituency, Bungoma county after she was said to verbally express feelings such as hunger and the need to relieve herself.