Wiper party leader Kalonzo Musyoka has said he will not beg for the support of ODM party leader Raila Odinga in order to win the 2022 Presidential elections.

Addressing mourners on Friday, August 23, during the burial of David Makumbi, the father of Machakos Woman Rep, Joyce Kamene Kasimbi, Kalonzo said has set his sights on being Kenya’s 5th president in 2022, and that he won’t beg for anyone’s political support to realise his dream.

Mr. Musyoka said he shelved his presidential bids for two consecutive terms in 2013 and 2017 in order to support Raila Odinga’s candidature adding that 2022 was his time to take over the mantle from President Uhuru.

“We do not want to appear like we are begging people all the time. You can’t beg for leadership. Power is not granted but seized. You would look very weak if you start crying that it is your turn to be endorsed,” said the former vice president.

“This is political warfare, power has to be grabbed. You must have a conviction why you want to be in power,” he added

Leaders from Kamba land which is also Kalonzo’s home turf wants the wiper leader to take over from President Uhuru Kenyatta once his term comes to an end in 2022. 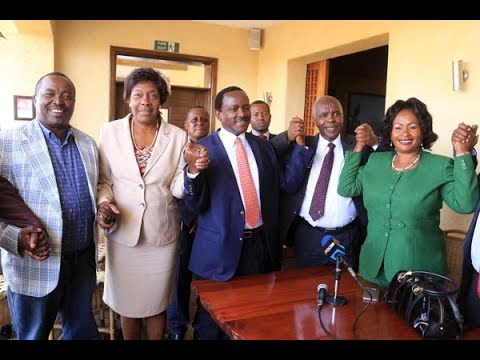 “Come 2022, we have a [presidential] candidate in the name of Kalonzo Musyoka. The only thing that we are now looking for, is a running mate,” said Kaiti legislator Kimilu.

His Mavoko counterpart, Makau, said: “The train has left the station. It is Kalonzo for State House in 2022. This message must go out to all other leaders in Kenya.” The message was reiterated by Ex-Machakos senator, Muthama, said: “I started moulding Kalonzo for the presidency in 1983, and to this date, I believe in him. Even President Uhuru Kenyatta and ODM leader Raila Odinga won’t sit pretty, given they are aware of Kalonzo’s influence. This man Kalonzo is capable of becoming president.”

On his part, Kalonzo urged all Ukambani politicians, who had spoken at the event before him, to believe in his ability to win the race without necessarily receiving Odinga’s support.