Nakuru Senator Susan Kihika has finally come out in public after a video of a woman who is believed to be a member of President Uhuru Kenyatta’s security confronting her went viral.

In the video, the outspoken politician is seen engaging in a heated argument with the woman who was dressed in civilian clothes. The climax of the video is when Kihika is slapped. Gilgil MP Martha Wangari and County Speaker Joel Kairuare were seen trying to intervene.

The cause of the confrontation has not yet been established.

A post allegedly from the ardent tanga tanga fanatic has been making rounds on social media. The Senator is alleged to have condemned the assault and at the same time pledged her unwavering love for Deputy President William Ruto. 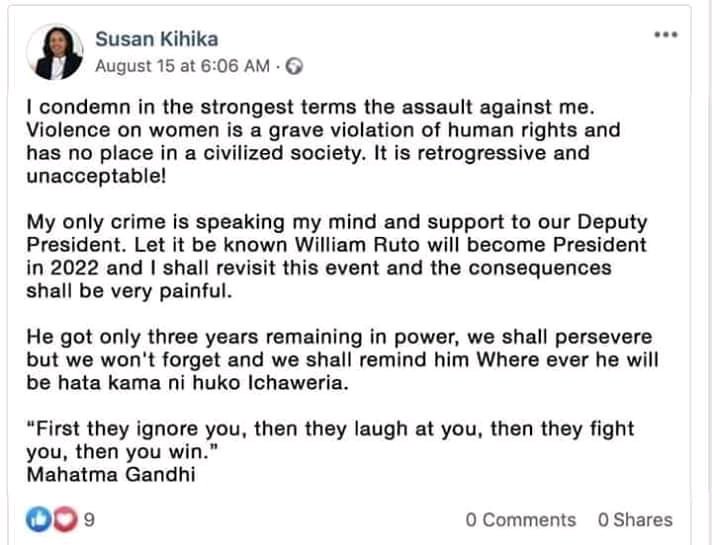 Kihika has however taken to her official Facebook page to disown the message, terming it as fake and asking her followers to treat it with the contempt it deserves.

Susan Kihika, also called the Iron Lady of Nakuru, has established herself as the most powerful politician in Nakuru County. She is a close ally of Ruto since her days as the Nakuru County Assembly Speaker. Political analysts say she is a member of the DP’s kitchen cabinet.

A daughter of the late Moi-era Politician Kihika Kimani, she has remained on Ruto’s side despite the political wave that is sweeping across Mt. Kenya