Deputy President William Ruto on Wednesday pleaded with newspaper owners to try and makes sales without using his name in the headlines.

According to the second in command, it was uncouth of newspapers, to use his name to make sells even when he was not involved in some of the stories.

In a midnight tweet, he put the Star newspaper on the spot over a story titled ‘Ruto Allies Plot to Scuttle Uhuru-Raila Referendum’ used on the cover page which he said was fake as he was not involved. 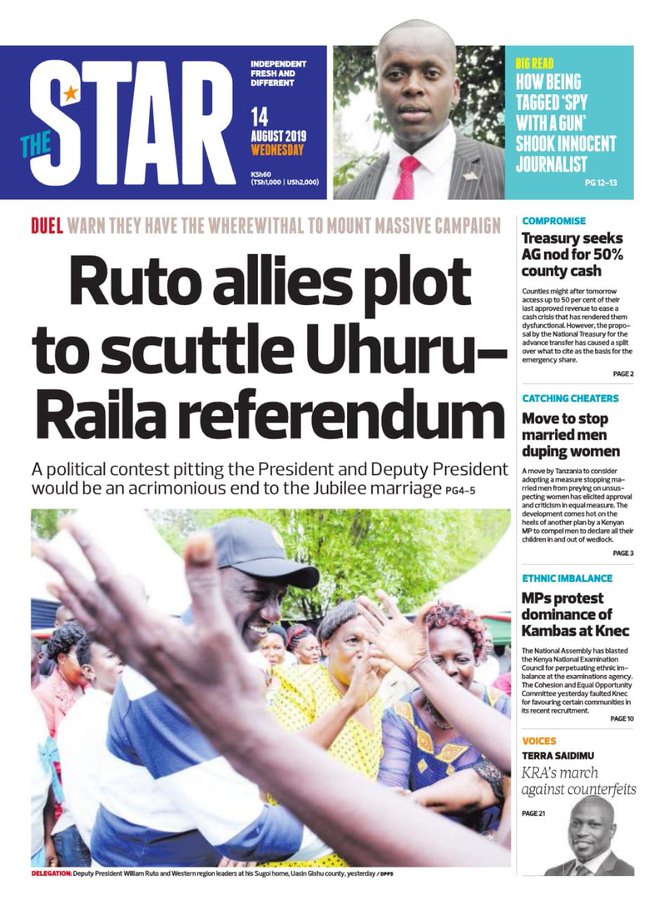 Screenshot of the Star Newspaper shared by DP Ruto which he termed as Fake News”This is what constitutes FAKE NEWS. I know it is difficult but newspapers should try selling without the ‘Ruto’ mention. Please! Tafadhali woiye! ” read the Dr.Ruto’s tweet.

This is what constitutes FAKE NEWS. I know it is difficult but newspapers should try selling without the 'Ruto' mention. Please! Tafadhali woiye! pic.twitter.com/As6mHhtajf

This is not the first time that the DP has blasted newspapers on fake news allegations. An article written by the Standard on Monday of 29th July claimed that President Uhuru Kenyatta arrived in the country from a Zambia trip but dodged his deputy who was at the JKIA Pavilion waiting for him.

Ruto claimed that he was nowhere near JKIA at the time. He claimed the newspaper was so desperate to make sales using his name.

FAKE NEWS ALERT!!!
I was nowhere near JKIA. I am NOT surprised that some media houses & their owners are this desperate. Tuwasamehe tu!! pic.twitter.com/vVjlLnCCd6